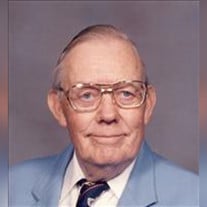 Storm Lake, IA.—Alfred E. Rasmussen, Sr.,91, formerly of Grand Island, Nebr. died on Mon., July 7, 2008, at the Methodist Manor Nursing Home in Storm Lake, Iowa.  He is known to some as Al and to others as Gene (he answered to both).   He was born in Ticonic, Iowa, on June 5, 1917, to Alfred Ole and Myrtle (Carroll) Rasmussen.  His family later moved to Ida Grove, Iowa, where he graduated from high school in 1934.  He then went on to Iowa State University in Ames, IA., and graduated in 1940 with a Bachelor of Science degree in Civil Engineering.  He married Josephine Eva Becker on Sept. 10, 1941, in Ida Grove, IA.  .  He was in the 110th Engineer Combat Battalion.  He served in WWII in the Pacific Ocean until the end of the war and then was honorably discharged.  He was an Eagle Scout and a life member of the American Society of Civil Engineers.  He was the Director of Utilities for the city of Sioux City, IA., in the 1960’s.  At that time he was a very active member of the Iowa Engineering Society.  He helped design the interstate system and bridges around Sioux City, IA., in the 1960’s. He was also a member of the American Water Works Association and the Society of Military Engineers.  He and Josephine lived for a short time in Phoenix, Arizona, in the mid 1960’s and then moved to Grand Island, Nebraska, where he was Director of Public Works from 1968 until 1980 when he retired.  He designed the water holding ponds for flood prevention in Grand Island.  In his retirement he was a real estate agent and volunteered at a school for immigrants teaching them to read English and balance their checkbooks.      His beloved wife, Josephine, died in 1989.  Gene continued to live in Grand Island until 2004 at which time he moved to Storm Lake, IA., until the time of his death.  His very dry sense of humor was enjoyed by many over his long life. Grateful for having shared his life are nine sons:  Gene Rasmussen, Jr. (Pam) of Storm Lake, IA., Marc (Sheri) Rasmussen of Santee, CA., Victor Rasmussen of  Grand Island, Nebr., Philip Rasmussen (Diane) of  Omaha, Nebr., Neil (Vicki) Rasmussen of Sulfur, LA., Perry (Janice) of Tucson, AZ., Tony Rasmussen of Grand Island, NE., Martin (Christy) Rasmussen of Colorado Springs, CO., Keith (Ruby) of Tucson, AZ.; three daughters, Paula (Dr.John) Chicoine of Parker, SD., Deanna Rasmussen of Ventura, CA., Lorna (Ron) Ziller of Tracy, CA.; 34 grandchildren and 15 great-grandchildren.     Preceding him in death were his wife, Josephine, his three brothers Carol, Harold and Roger, his parents and a granddaughter Melissa Rasmussen.  The funeral will be held at St. Leo’s Catholic Church, 2410 South Blaine St., Grand Island, NE., on Fri, July 11, 2008, at 10:30 a.m.   There will be visitation from 4:00 to 7:00 p.m., prayer service at 7:00 p.m. on Thurs, July 10, all at St. Leo’s Church.    Memorials are suggested to the Methodist Manor.

The family of Alfred E. Rasmussen created this Life Tributes page to make it easy to share your memories.

Send flowers to the Rasmussen family.