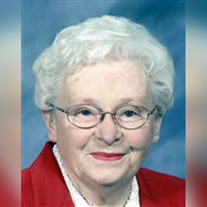 Alice M. Ptacnik, 84, of Grand Island, died Wednesday, September 29, 2010 at the Golden Living Center-Park Place in Grand Island.    Funeral services will be on Monday at 2:00 P.M. at Blessed Sacrament Catholic Church.  The Rev. Todd Philipsen will officiate.    Visitation will be on Sunday from 4:00 P.M. until 7:00 P.M. with a rosary at 7:00 P.M. at the church.    As per her request, following the funeral on Monday, Mrs. Patachnik’s body will be cremated.      Committal services will be on Friday, October 15th at 10:00 A.M. at Westlawn Memorial Park Cemetery.    Livingston-Sondermann Funeral Home is in charge of arrangements.    Mrs. Ptachnik was born on August 29, 1926 at Ord, Nebraska to Anton and Victoria (Barnas) Swanek.    Survivors of the immediate family include two daughters and sons-in-law, Linda and David Rehovsky of Grand Island, and Deborah and William Simpson of Omaha; one brother and sister-in-law, Edmund (Lavina) Swanek of Council Bluffs, Iowa.    Additional survivors include three grandchildren, Stephen Simpson and Christina Liquori of Raleigh-Durham, North Carolina, Bethany (Daniel) Dewsnap of Lexington, Kentucky, and William Rehovsky of Grand Island; and two great-granddaughters, Madeline and Annabelle Dewsnap.    Alice grew up and attended school in Ord.    She married William ‘Bill’ Ptacnik on April 9, 1945 in Omaha.  The couple lived west of Ord for 10 years before moving to Grand Island in 1955.    Mrs. Ptacnik worked for Dr. Maggiore and then for Dr. Leo Adams in Grand Island. She was then employed at Midwest Dermatology.    Alice was a member of Blessed Sacrament Catholic Church.    She enjoyed working with people, dancing, doing needlework, and she was an excellent baker.   Memorials are suggested to the American Heart Association, or to the National Breast Cancer Foundation.

The family of Alice M. Ptacnik created this Life Tributes page to make it easy to share your memories.

Send flowers to the Ptacnik family.