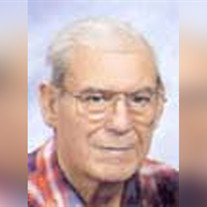 Allie J. Valasek, 80, of Grand Island died Sunday, July 2, 2006, at St. Francis Medical Center. Memorial services will be at 2:00 P.M. Wednesday at Blessed Sacrament Catholic Church. The Rev. Harold Kurtenbach will officiate. Burial will be in Westlawn Memorial Park Cemetery with military rites provided by the United Veterans Honor Guard. There will be no visitation. At Mr. Valasek’s request, his body was cremated. Livingston-Sondermann Funeral Home is in charge of arrangements. Mr. Valasek was born June 17, 1926 at Cedar Rapids, NE to Mike and Anne (Kowalski) Valasek. Survivors of the immediate family include his wife, Louise Valasek of Grand Island; five sons and three daughters-in-law, Victor and Adel Valasek of Elkhorn, NE, Jim and Deb Valasek of Chapman, NE, Bill and Patti Valasek of Berthoud, CO, Larry Valasek and David Valasek both of Grand Island; three brothers, Mike of Wolbach, NE, Alfred of Genoa, NE and Joe of St. Paul, NE; one sister, Irene of Sioux City, IA. Additional survivors include nine grandchildren and one great-grandchild. Allie grew up on a farm near Wolbach and attended country school. He entered the U.S. Army on January 24, 1951. He was stationed at Camp McCoy, Wisc. and served in Korea. He was honorably discharged on October 23, 1952. he had received two honorable medals for his service. Allie married Mary Louise Knapp on August 17, 1953. They lived on farms north of Palmer and northwest of Dannebrog. The family moved to Grand Island in 1970. Allie worked at Redman’s Manufacturing, Berkley Pumps and then the Grand Island Veterans Home from which he retired in June of 1996. He was a member of Blessed Sacrament Catholic Church, the Eagles and United Veterans Club. Allie enjoyed playing accordion, playing solitaire and raising a garden. Memorials are suggested to the family.

The family of Allie J. Valasek created this Life Tributes page to make it easy to share your memories.

Send flowers to the Valasek family.