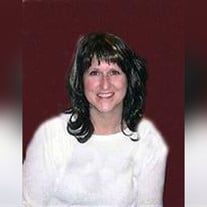 Angela Marie McConnell, 43, of Santa Rosa, CA, formerly of Grand Island, died Wednesday, March 23, 2011 at home. Funeral services will be at 10:30 am Friday at Trinity Lutheran Church. There will be a family prayer service at 10:15 am. The Reverend Jack Gillham will officiate. Visitation will be from 5-8 pm Thursday at Livingston-Sondermann Funeral Home.  Additional services were held on Monday, March 28, 2011 at Adobe Creek Funeral Home in Petaluma, California. Angela was born on February 28, 1968 in Grand Island to Raymond and Carol Ann Quandt. She graduated from Trinity Lutheran School and Northwest High School. She attended Doane College and received her degree from the Art Institute of Dallas. She was united in marriage to Kevin McConnell on June 6, 1992. The couple made their home in Garland, TX and Santa Rosa, CA where she worked as a graphic artist for CBS in San Francisco and continued to free lance as a designer and artist from her home. Angela was baptized and confirmed in the Lutheran Faith at Trinity Lutheran Church in Grand Island. She was a member of Bethlehem Lutheran Church, a yearly room mother for her children, an art docent in the schools, and a soccer, baseball, softball and basketball Mom. She was a devoted wife and mother and courageously fought breast cancer for the past 10 years. Survivors of the immediate family include her husband Kevin, children Megan and Cameron all of Santa Rosa, CA; her parents Raymond and Carol Ann Quandt of Grand Island; four sisters, Amy (Rudy) Killham of Lincoln, Joni (Brad) Beckman of Lincoln, Sue (Jeff) Baxter of Cedar Rapids, IA, and Steph (Jeff) Pape of Norfolk, NE; a brother-in-law, Mike (Sonia) McConnell of Rowlett, TX; nephews and nieces, Maggie and Jake Killham, Austin, Gussie and Zach Beckman, Alex, Ben and Maddy Baxter, Ty and Quinn Pape. She was preceded in death by her paternal grandparents, Walter and Laura Quandt, maternal grandparents, Roland and Edith Lowry, Uncles Loran and Ralph Quandt and Phil Lowry, Aunts Patty, Jeanne and Sylvia, and cousins, Nancy Hupp and Tim Quandt. Memorials are suggested to Trinity Lutheran Church, Angela McConnell Scholarship Fund or the Family’s Choice.

Angela Marie McConnell, 43, of Santa Rosa, CA, formerly of Grand Island, died Wednesday, March 23, 2011 at home. Funeral services will be at 10:30 am Friday at Trinity Lutheran Church. There will be a family prayer service at 10:15 am. The... View Obituary & Service Information

The family of Angela M. McConnell created this Life Tributes page to make it easy to share your memories.

Send flowers to the McConnell family.