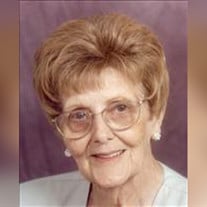 Angela Elaine Rathjen, 86, of Grand Island, died Sunday, December 21, 2008 at her home in Primrose Retirement Community. Funeral services will be at 10:30 A.M. Saturday at Peace Lutheran Church. The Rev. Mike Reiners will officiate. Burial will be in Hemet, California. Livingston-Sondermann Funeral Home is in charge of arrangements. Elaine Rathjen was born on March 18, 1922 at Burlington, Colorado to Edward and Winona (Sanders) Larsen. Survivors of the immediate family include four sons and their wives, Jerry & JoAnn Rathjen of Henderson, Nevada, Leslie & Diane Rathjen of Aurora, Lynn & Glenda Rathjen of Grand Island, and Roger & Jane Rathjen of San Diego; three sisters, Clara of Ceres, California, Ella Mae of Ravenna, and Mary Lou of Grand Island; and three brothers, Roger of Hollywood, Florida, George of Lincoln, and Jack of Minneapolis, Minnesota. Additional survivors include 9 grandchildren; and 17 great-grandchildren. Elaine grew up on a farm in Hazard, Nebraska.  She graduated from Loup City High School in 1938.   She married Herold Rathjen on June 1, 1941 in Ravenna. The couple moved to a farm near Harbine, Nebraska, where they lived for four years.  The next 20 years, the family lived in Beatrice where Elaine raised her four sons.  She taught school for 17 years in rural grade schools around Beatrice. She was a member of St. Paul’s Lutheran church while in Beatrice and continued membership in several Lutheran churches as she and Herold moved to Akron, Colorado, and later to Hemet, California.  Elaine moved to San Diego to be close to her son Roger and daughter-in-law Jane after Herold died.  The last three years, she lived at Primrose Retirement Community where she developed many friendships.  She was a devoted mother and wife as she enjoyed 86 wonderful years of life. She was a member of Peace Lutheran Church in Grand Island. In addition to her husband Herold, she was preceded in death by three sisters, Alice Dady, Anna Belle Baker, and Arelene Hatch. Memorials are suggested to Peace Lutheran Church.

The family of Angela Elaine Rathjen created this Life Tributes page to make it easy to share your memories.

Send flowers to the Rathjen family.