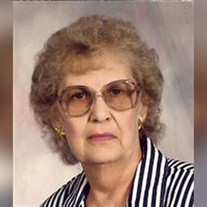 Anna M. Kroeger, 76, of Grand Island, died Sunday, May 30, 2010 at the St. Francis Medical Center.    Funeral services will be on Thursday at 10:30 A.M. at Livingston-Sondermann Funeral Home.  The Rev. Bill Pavuk will officiate.    Burial will be at Westlawn Memorial Park Cemetery.    Visitation will be on Wednesday from 4:00 until 8:00 P.M. at the funeral home.      Mrs. Kroeger was born on April 2, 1934 in Lincoln to Neils and Evelyn (Eskilson) Miller.    Survivors of the immediate family include one son and daughter-in-law, Alan and Christy Kroeger of Grand Island; and two daughters, Kathy Kroeger and Marsha Kroeger both of Grand Island.    Additional survivors include two grandsons, Tyler Kroeger, and Cody Kroeger, both of Grand Island.  Special granddaughters, Melissa West of Grand Island, Susan Miller and her husband Dale of Grand Island; Susan and Dales daughters, Lily and Ava; special grandson, Cody Earnest of Grand Island; several nieces and nephews, and her special pets, Casey, Ghost, and Nightmare.    Anna received her education in Marquette, and graduated from Marquette High School in 1951.    She married Henry Kroeger on February 21, 1954 in Marquette.    Mrs. Kroeger raised a family and was employed at Leon Chemical in Alda for over six years.  She was then employed at the Egg Plant in Grand Island for two years.  Anna was then employed at the Nebraska Veterans Home in the laundry department for 16 years.  She retired in 1996.    Anna loved roses and her flower garden.  She enjoyed collecting ceramic frogs, reading, and watching NASCAR.  Her favorite driver is Dale Earnhardt Jr. She also enjoyed watching wrestling on T.V.    She was a member of St. Paul’s Lutheran Church, the Platte-Deutsche, and the V.F.W.    Anna was preceded in death by her husband in 1997; and by twin sons, David and Paul.    Memorials are suggested to the family.

The family of Anna M. Kroeger created this Life Tributes page to make it easy to share your memories.

Send flowers to the Kroeger family.