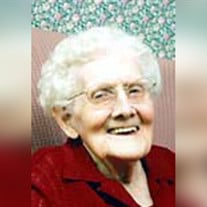 Anna F. McNelis, 91, of Grand Island died Saturday November 18, 2006 at the Western Hall County Good Samaritan Center in Wood River.    Services will be at 10:30 A.M. Wednesday at Blessed Sacrament Catholic Church.  The Rev. Francis T. Curran will officiate.  Burial will be in Westlawn Memorial Park Cemetery.    Visitation will be from 4 to 8 P.M. with a 6 P.M. vigil service on Tuesday at the church.    Livingston-Sondermann Funeral Home is in charge of arrangements.    Mrs. McNelis was born December 18, 1914, at Spalding to William and Mary (Leiting) Kramer.    Survivors of the immediate family include three daughters and two sons-in-law, Rose Mary and Don Debban of Elwood, NE, Julia Ann and Benny Medina of Burbank, WA and Dolores Stafford of Grand Island; and one son and daughter-in-law, Francis ‘Frank’ and Barbara McNelis of Grand Island; one sister, Rose Fenton of Rogers, Ark. and one sister-in-law, Mary Haschke of Greeley, NE.    Additional survivors include 19 grandchildren; 48 great-grandchildren; three great-great-grandchildren; and several nieces and nephews.    Anna grew up and attended country school at Spalding.    She married Donald McNelis on April 23, 1934, at St. Michael’s Church in Spalding.  They lived in Spalding, then in Greeley and later in Scotia.  They moved to Grand Island in 1957 where Anna worked as cafeteria manager at Central Catholic School until her retirement.    Following her husband’s death in 1975, Anna continued to live in the family home in Grand Island. Her declining health required her to move to the Good Samaritan Center in Wood River in August of 2001.    She was a member of Blessed Sacrament Church.    She especially enjoyed the time she spent with her family.    Mrs. McNelis was preceded in death by her husband, Donald; a son-in-law, Harry Stafford; and infant sister; five brothers, William, Albert, Henry, Joseph and Frank; and four great-grandchildren.    Memorials are suggested to the family’s choice.

The family of Anna F. McNelis created this Life Tributes page to make it easy to share your memories.

Send flowers to the McNelis family.