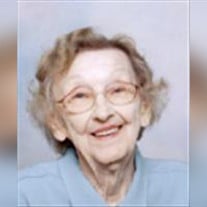 Anna E. Novotne, 93, of Grand Island, died Thursday, March 27, 2008 at the St. Francis Medical Center.       Funeral services will be on Monday at 11:00 A.M. at St. Mary’s Cathedral.    The Rev. Vince Parsons will officiate.    Burial will be at 1:30 P.M. Monday at the Central City Cemetery.       Visitation will be on Sunday from 4:00 until 7:00 P.M. with a Catholic Daughters rosary at 4:00 and a parish rosary at 7:00 P.M. at Livingston-Sondermann Funeral Home.      Mrs. Novotne was born on June 28, 1914 in Buffalo County, Nebraska to John and Sophia (Pokorney) Kriha.      Survivors of the immediate family include one daughter, Patricia Filbin of Wood River; one son and daughter-in-law, James & Mary Novotne of Columbus; and one sister, Rose Housechild of Grand Island.        Additional survivors include five grandchildren, Michelle Irish, Cynthia Filbin, Lisa Filbin, Erik Novotne, and Cassandra Novotne; and two step-grandchildren, Zieth and Jestin Summers.       Mrs. Novotne received her education in Buffalo County.  After her education, she worked on the family farm.       She married Emil Novotne on June 26, 1930 in Ravenna.    Mrs. Novotne raised a family and assisted her husband on the farm until they moved to Central City.      Mr. Novotne died in 1986, and Mrs. Novotne moved to Grand Island in 1989.      She was a member of St. Mary’s Cathedral, St. Mary’s Altar Society, the Catholic Daughters, and she was also active at the Grand Generation Center.      In addition to her husband, she was preceded in death by three brothers, Joe Kriha, Charles Kriha, and John Kriha; and one sister, Elizabeth Youngdahl.    Memorials are suggested to the family.

The family of Anna E. Novotne created this Life Tributes page to make it easy to share your memories.

Send flowers to the Novotne family.