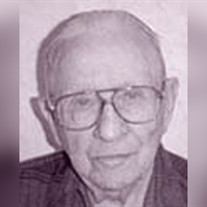 Austin A. ‘Sarge’ Muth, 94, of Grand Island, died Friday, November 24, 2006 at the St. Francis Medical Center.    Funeral services will be on Tuesday at 10:00 A.M. at Blessed Sacrament Catholic Church.  The Rev. Francis Curran will officiate.    Burial will be at the Westlawn Memorial Park Cemetery.    Visitation will be on Monday from 4:00 until 8:00 P.M. with a 7:00 P.M. rosary at Blessed Sacrament Catholic Church.    Livingston-Sondermann Funeral Home is in charge of arrangements.    Mr. Muth was born on January 2, 1912 at Hawarden, Iowa to William and Mary (Thenies) Muth.    Survivors include his niece and her husband, who were his caregivers, Carmella & Gene Scarborough of Grand Island; three brothers, Bernard Muth of Sioux City, Paul Muth of Ft. Worth, Texas, and William Muth of Omaha; two sisters, Dorothy Swanson of Sioux City, and Madeline Carlson of Winsted, Minnesota.     Additional survivors include 22 nieces and nephews    Mr. Muth received his education in Hawarden, Iowa.    He helped out on the family farm until 1934 when he enlisted in the Army Remount Service at Fort Robinson, Nebraska.  In January 1941, he reentered the service and in the summer of 1942, he went to England and later took part in the North Africa and Italian Campaigns. After the war, he remained in the service, and in 1948 was assigned to the Nebraska Military District with his duty station at Grand Island.  He served as an enlisted advisor for the Army Reserve, for the purpose of helping to establish reserve units in the central and western part of Nebraska.    On November 3, 1953, he married Amy Alexander in Grand Island.    In 1957, after completing his second tour of duty in Korea, he was reassigned to Grand Island, to work with the Army Reserve.  Mr. Muth retired in January 1966 after 28 years with the service.  After his retirement, he worked for Sidles Automotive Company for 10 years.    His wife Amy died in March of 1997.  He has been a resident at the Nebraska Veterans Home for the past 7 years.    He was a member of Blessed Sacrament Catholic Church, the VFW, and the American Legion.    In addition to his wife and parents, he was preceded in death by three brothers, John, Louis, and Lawrence Muth.    Memorials are suggested to the Blessed Sacrament Catholic Church.

The family of Austin 'Sarge' A Muth created this Life Tributes page to make it easy to share your memories.

Send flowers to the A Muth family.