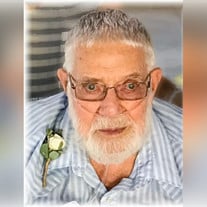 Ben Wilson, 80, of Grand Island, formerly of Cairo, passed away on Thursday, February 28, 2019. After many health issues, his body stopped fighting and he passed peacefully at home.   A memorial service will be held at Peace Lutheran Church, at 11:00 AM on Tuesday, March 5, 2019 in Grand Island, NE. With Pastor Mike Reiners officiating. His body will be cremated per his request. Ben was born on March 31, 1938, in Newcastle, Wyoming, to Clark & Mabel (Gray) Wilson.  He attended Newcastle High school, then served in the U.S. Army from 1956 to 1960. Ben was united in marriage to Elaine Gilles on August 27, 1961, in Hot Springs, South Dakota.  They made their home wherever the jobs were, including Cheyenne, Wyoming, Rapid City, Custer, and Aberdeen, SD, before moving to Nebraska.  Ben worked at Sperry New Holland for 31 years as a welder, draftsman, and Quality Control Inspector.  He retired in 1998. Ben and Elaine loved to travel and meet new people.  He was active State Director in IHMSA, a shooting organization, and traveled around the United States as well as Canada and Brazil to compete. Ben could fix, or at least jury-rig, about anything, and was always tinkering with a car, house, or a gun.  He liked to hunt, shoot, garden, and watch the Huskers.  He also was very active as a fan of anything his sons and grandchildren were involved in.  He is survived by his wife, Elaine; three sons, Doug & Kathy Wilson of Grand Island, Mike Wilson & Lara Oliver of Denver, Colorado, and Ron & Denise Wilson of Chicago, Illinois; a brother Carl Wilson; and a sister, Mary Ellen; 7 Grandchildren and their significant others, Daanielle Wilson & Evan Kurth of Chandler, AZ, Dylan Wilson of Lincoln, Courtney Wilson & Jeremy Hansen of Chandler, AZ, Bailey & Adrian Winters of Denver, CO, Alex Wilson of Rogers, AR, Jack & Emily Wilson of Lincoln, and Renick Wilson & Rene Maldonado of Lincoln; and a great-granddaughter, Melody Winters.  He was preceded in death by his parents; and a brother, Wayne.  Memorials are suggested to the Family to be designated at a later date. Online condolences may be directed to www.livson.com. Livingston-Sondermann Funeral Home is entrusted with arrangements.

Ben Wilson, 80, of Grand Island, formerly of Cairo, passed away on Thursday, February 28, 2019. After many health issues, his body stopped fighting and he passed peacefully at home.   A memorial service will be held at Peace Lutheran Church,... View Obituary & Service Information

The family of Ben C. Wilson created this Life Tributes page to make it easy to share your memories.

Ben Wilson, 80, of Grand Island, formerly of Cairo, passed away...

Send flowers to the Wilson family.