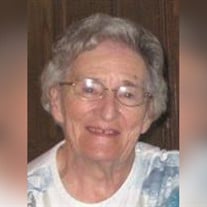 Bette L. Boyle, 85, of Grand Island, died Thursday, August 16, 2012 at St. Francis Medical Center. Funeral services will be at 10 am Saturday, August 18, at Livingston-Sondermann Funeral Home. Fr. Todd Philipsen will officiate. Burial will be in Westlawn Memorial Park. Visitation will be from 7-9 pm Friday at the funeral home. Memorials are suggested to Blessed Sacrament Catholic Church. Bette was born on October 17, 1926 in Staples, Minnesota to Perry M. and Eva A. (Pride) Seely. She grew up and received her education in Minnesota and Montana, graduating from Park High School in Livingston, Montana. She was united in marriage to Thomas Boyle on November 19, 1945 in Missoula, Montana. The couple made their home in Spokane, Washington where she worked in the Boeing Aircraft Plant. Following Thomas’s discharge from the Navy the couple moved to Grand Island where they owned and operated Boyle’s Color Lab and Camera Shop. In 1984 they retired and sold the shop. Mr. Boyle preceded her in death on September 25, 1994. Bette was a member of Blessed Sacrament Catholic Church and the Catholic Daughters. She enjoyed cooking, baking, needle point, traveling with her husband and volunteering at St. Francis Medical Center and Blessed Sacrament Catholic Church. Survivors of the immediate family include three daughters and a son-in-law, Mary Lou and Raymond Harp of Grand Island, Pamela Sue Wells of Des Moines, IA and Mellette Cercado of Grand Island; six grandchildren, four great grandchildren; and several nieces and nephews. Bette was preceded in death by her parents, her husband, a grandson, Thomas Butler, three brothers, Perry Seely, Jr., James L. Seely, Jerome Seely and a sister, Georgia Nardella.

The family of Bette Boyle created this Life Tributes page to make it easy to share your memories.

Send flowers to the Boyle family.