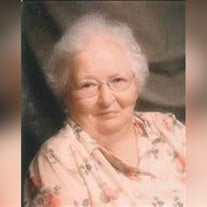 Betty M. Johnson, 78, of Aurora, formerly of Grand Island, died Monday, June 11, 2012 at Hamilton Manor in Aurora. Funeral services will be at 10:30 am Friday at Livingston-Sondermann Funeral Home in Grand Island. Father Richard Piontkowski will officiate. Visitation will be from 5-8 pm Thursday at the funeral home with a 7 pm rosary. Burial will be at 3 pm at Sacred Heart Cemetery in Greeley. Memorials are suggested to the family’s choice. Betty was born on August 3, 1933 in Greeley to George and Bertha (McMahon) Fisher. She grew up in Greeley and attended country school. She was united in marriage to Edward Johnson on October 29, 1951 in Greeley. The couple made their home in Grand Island where she was a devoted housewife and mother. Mr. Johnson preceded her in death on August 3, 1997. Betty was a member of St. Mary’s Cathedral. She enjoyed reading, cooking, sewing and most of all spending time with her family, especially her grandkids. Survivors of the immediate family include three daughters and two sons-in-law, Karen Johnson of West Virginia, Linda and Bob Garrison of Maryland, and Mary and Lowell Mitteis of Grand Island; a son and daughter-in-law, Steve and Joyce Johnson of St. Paul, Ne; three grandchildren, Brandon Mitteis and his fiancé Jen, Cody Mitteis and his special friend Lauren, and Caitlin Garrison. She is also survived by two step great grandchildren, Diedrich and Abbigail; two sisters and a brother-in-law, Esther Bernt of Spalding and Joyce and Mick Costello of Greeley;  three brothers and a sister-in-law, William Fisher of Montana, Boyd and Pam Fisher of Illinois and Rod Fisher of Grand Island. Betty was preceded in death by her parents, her husband, a son, Edwin, a granddaughter, Melissa, and two brothers, Orville and Ivan Fisher.

The family of Betty M. Johnson created this Life Tributes page to make it easy to share your memories.

Send flowers to the Johnson family.