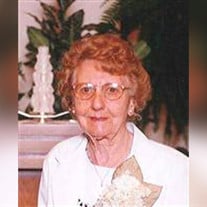 Catherine “Cab” M. Voss, 87, of Grand Island died Friday, April 22, 2011 at Wedgewood Care Center. Funeral services will be at 10:30 am Tuesday at Livingston-Sondermann Funeral Home. The Reverend Melanie Adams will officiate. Visitation will be from 4-8 pm Monday at the funeral home. Following the services Catherine will be cremated. Burial of ashes will take place at a later date at Westlawn Memorial Park. Memorials are suggested to Aseracare Hospice. Catherine was born on January 25, 1924 in Wallace, Nebraska to Carl A. and Sara A. (Pittenger) Bartenbach. She grew up and received her education in Petersburg, Nebraska. She graduated from Petersburg High School in 1942. She was united in marriage to Harold Voss on August 3, 1943 in Grand Island. The couple made their home in Grand Island where they raised their family. Cab loved gardening, sewing, working in the yard, fishing and camping. She also enjoyed watching her favorite television program, the Lawrence Welk Show. She is survived by a son Michael (Dianna) Voss of Grand Island, a son George (Cleo) Voss of Grand Island, four grandchildren, 9 great grandchildren, a sister Helen Schilousky of Ewing, NE, a sister Alvina Herpolsheimer of Mulvane, KS, and numerous nieces and nephews. She was preceded in death by her parents, her husband, a brother Chuck Bartenbach, and a sister Jeanette Schilousky.

The family of Catherine "Cab" M. Voss created this Life Tributes page to make it easy to share your memories.