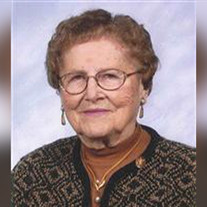 Clara M. Silver, 97, of Grand Island died Sunday afternoon , October 23, 2011 at St. Francis Medical Center. Mass of Resurrection will be at 10 am Friday at Blessed Sacrament Catholic Church. Father Francis T. Curran will officiate. Burial will be in Westlawn Memorial Park. Visitation will be from 4-7 pm Thursday at Blessed Sacrament with a Scripture Wake Service at 7 pm with Father Richard Piontkowski presiding.  Livingston-Sondermann Funeral Home is serving the family. Memorials are suggested to the Blessed Sacrament Preschool. Clara was born on May 17, 1914 on a farm northeast of Loup City, Nebraska to Thomas and Polly (Lukaczewski) Lewandowski. She grew up on the farm and attended District 73 (Schaupps) country school in Sherman County.  She worked for Fairmont Foods, Amelia’s Dress Shop and Lewandowski in Loup City. She was united in marriage to Floyd Silver on May 12, 1941 in Loup City. The couple made their home in  Loup City before moving to Grand Island and then Willmar, MN in 1956. They moved to Chariton, Iowa in 1966 and then to New Ulm, MN in 1971 and later moved back to Grand Island in 1977 where they remained. Clara worked for JC Penny for over 18 years, retiring in 1979. Throughout the years the couple was very involved in the Catholic Church in the communities they lived. Clara was a loving and giving person who touched many lives throughout her lifetime. She gave generously to Blessed Sacrament, the church renewal project, the jubilee center and helped start the parish Thrift Store. She also gave to the Catholic Missionaries, the vocations and helped families in need so that their children could attend Grand Island Central Catholic High School. She was a member of Blessed Sacrament Catholic Church in Grand Island, the Rosary Sodality, the Catholic Daughters, and the Altar Society. For years Clara tended to the candles in the church chapel. She attended daily mass for many years, until recently when she was unable due to poor health.  Survivor of the immediate family is a son, Kenneth R.  Silver of Newport News, VA. Clara is also survived by a nephew, Arnold (Arlene) Platek of Clay Center, NE; a niece, Elaine (Alex) Kulwicki of St. Paul, NE; several nieces and nephews, and a special friend, Donna Narber of Grand Island. Clara was preceded in death by her parents, her loving husband Floyd, a brother, Richard Lewandowski, and a sister, Nellie Platek.

The family of Clara M Silver created this Life Tributes page to make it easy to share your memories.

Send flowers to the Silver family.