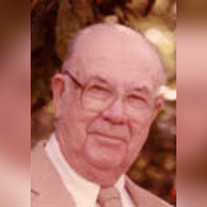 We, the family of Bill Geil, announce the death on July 24, 2007 of our beloved Dad, Granddad, Brother, Uncle, and friend.  There are no words to describe our gratitude and pride in being blessed with this extraordinary man.    His long and full life was a living testimony of integrity, devotion to his family and friends, service to all who needed him, and an unconquerable sense of humor and optimism.  We honor him by trying to emulate him as best we can.    D.A. ‘Bill’ Geil was born October 21, 1906 to Delmond and Susan (Springer) Geil in St. Paul, Nebraska.  He was the third of four children.  One sister, Lelah Geil Argus died in 1950.  Of the remaining three, his sister, Marian Geil Tobias, died at age 106 in February, 2007.  His sister, Mildred (Topsy) Geil Evans, is 99, and a lifelong resident of Grand Island.    In August, 1931, Bill married Frances Cavanaugh (deceased) of St. Joseph, Missouri.  They had two children, Sue Ann Geil Pach (husband, Donald M. Pach) of Fair Oaks, California, and Thomas Fel Geil (wife, Claire Casellini Geil) of Richland, Michigan.  He leaves seven grandchildren, and twelve great-grandchildren.    Besides his immediate family, Bill is survived by his nieces, Barbara Evans Weaver and her family, and Susan Evans Glade and her family, both of Grand Island, and Carol Tobias Gazley and family of Monterey, Tennessee, and nephew, Larry Tobias and family of Kansas City, Missouri.    Bill attended Grand Island schools and Grand Island Baptist College.  He worked many years for International Harvester Co. and Chrysler Corporation in management positions.  After retiring, he and his wife Fran, returned to Grand Island in 1968.  He then proceeded to work with his best pal and brother-in-law, Gordon Evens, at Flower-Evans Insurance.    His life was an example of unselfishly caring for others.  He never wanted any recognition of his efforts, although he was honored as a Nebraska Good Neighbor by the Omaha World Herald, and was written up several times in various publications.  When family and friends would praise him for his good works, he would say, “Damn it, I wouldn’t do it if I didn’t find enjoyment in it.”    Fran died in 1991, and a few years later, Bill moved into Riverside Lodge, where he was lovingly cared for.  We are eternally grateful to all the staff and help at Riverside for their devotion and kindness to Dad.  We could never praise them adequately for the amazing care they gave him.    We would like to thank his longtime doctor, William Landis, M.D., who has been extremely kind and thorough in caring for (and exchanging jokes with) Dad for many years.  Rosie Dinan and Melody Anderson, of St. Francis Hospice, were outstanding in their ministrations to him and their kindnesses to the family.    Last, but certainly not least, we can never express adequately our gratitude to Dad’s beloved sister, Topsy Evans, and her daughters Bobbie Weaver and Susan Glade, and all their families for their unfailing care and attention to Dad throughout the years.    We will miss him more than words can say.  But heaven will certainly ring with joy and laughter as it welcomes a truly noble man.      Funeral services for D.A. ‘Bill’ Geil will be on Saturday at 10:00 A.M. at St Leo’s Catholic Church.  The Rev. Jack Rademacher will officiate.    Burial will be at the Grand Island City Cemetery.    Visitation will be on Friday from 6:00 until 7:00 P.M. with a rosary at 7:00 P.M. at the church.    Memorials are suggested to St. Leo’s Catholic Church; St. Francis Hospice, or to the donor’s choice.

We, the family of Bill Geil, announce the death on July 24, 2007 of our beloved Dad, Granddad, Brother, Uncle, and friend.  There are no words to describe our gratitude and pride in being blessed with this extraordinary man.    His long and... View Obituary & Service Information

The family of D.A. 'Bill' Geil created this Life Tributes page to make it easy to share your memories.

Send flowers to the Geil family.