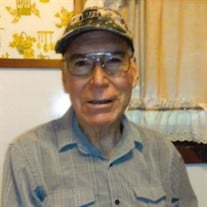 Dale D. Johnson, age 84, of Grand Island, passed away on Monday, July 5, 2021 at Edgewood. Funeral service will be on Saturday, July 10, 2021 at 10:00am at Livingston-Sondermann Funeral Home. Visitation will be on Friday, July 9, 2021 from 6-8pm at the funeral home. Burial will be at Westlawn Memorial Park Cemetery. Memorials are suggested to Goodwill Industries. Dale was born on May 12, 1937 in Ord to Guy and Dollie (Byerly) Johnson. He grew up in Ord and Greeley. He attended District 58 in Ericson and his mother was his teacher. On November 22, 1958 he married Susan McQuinn and they were blessed with 3 children, Cindy, Steven and Kevin. On May 26, 1979 he married Leota Glantz Christensen at Faith Methodist Church. After which the couple lived in Grand Island. Dale worked in St. Paul before moving to Grand Island in 1958. He worked as a foreman at Aluminum Supply Co. before going into business as a mechanic and owner/operator of Dale’s Tune-Up until his retirement. He enjoyed spending time in Ericson and restoring tractors and showing them at various shows. He liked working outside in his yard, tinkering in his garage and just keeping busy. He also liked having cats for pets and classic country and blue grass music were his favorites. Survived by children, Cindy (Mike) Christensen and Kevin Johnson; step-children, Sherry Elvington, Rhonda (Gene) Anderson, Kathy (Dave) Snider, Ron Christensen and Julie Musquiz; grandchildren, Justin Johnson and Jonathan Christensen; great granddaughter, Genesis Christensen; several step-grandchildren and step-great-grandchildren and beloved cats, Spook and Barney. Preceded in death by parents; son, Steven; wives, Susan and Leota; brothers, Walter and Clifford; 2 sisters-in-law; 1 daughter-in-law and cats, Smokey and Puddin’. Condolences can be left at www.livson.com

The family of Dale D. Johnson created this Life Tributes page to make it easy to share your memories.

Send flowers to the Johnson family.