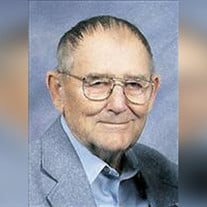 Daniel P. Jonak, 88, of Grand Island died Sunday, December 14, 2008, at the Grand Island campus of the VA Nebraska-Western Iowa Health System. Services will be at 10:00 AM Thursday at Blessed Sacrament Catholic Church.  The Rev. Todd Philipsen will officiate.  Burial will be in Westlawn Memorial Park Cemetery with military rites provided by the U.S. Navy and the United Veterans Honor Guard. Visitation will be on Wednesday at Livingston-Sondermann Funeral Home from 4 to 7 PM with a parish rosary at 7 PM. Mr. Jonak was born September 11, 1920, at Loup City, NE to Stanley and Henrietta (Klatka) Jonak. Survivors of the immediate family include his wife Betty Jonak of Grand Island; one son and daughter-in-law, Larry and Sue Jonak of Omaha; two daughters and a son-in-law, Barbara and John Hovie of Grand Island, and Joyce Andrews of Iowa City, IA; one brother, Alvin Jonak of Casper, WY; a half-brother and his wife, Wesly and Ann Engleman of Casper, WY. Additional survivors include seven grandchildren, Alison Taylor, Paul and Philip Jonak, Jody Hagerty, Nathen Hovie, SiAra Rasmussen and Kip Hovie; and seven great-grandchildren. Mr. Jonak grew up in the Loup City and Arcadia area where he attended rural school.  He helped on the family farm following his education. He served in the U.S. Navy in the final years of World War II. Following his military service, he returned to Nebraska to farm. Dan married Betty Dunder on May 20, 1947, at Grand Island.  They farmed in the St. Paul area for three years then moved to a farm near Cotesfield.  They then moved to a farm near Grand Island which they farmed for 20 years.  In 1974, they moved to Central City until returning to their farm near Grand Island in 1991.  Dan and Betty moved into Grand Island in 2006.  They enjoyed spending the winter months in Coolidge, AZ. One of Dan’s greatest joys was raising pigs on the farm. Dan’s family was his pride and joy. He was a member of Blessed Sacrament Catholic Church. In lieu of flowers, memorials are suggested to Blessed Sacrament Catholic Church.

The family of Daniel P. Jonak created this Life Tributes page to make it easy to share your memories.

Send flowers to the Jonak family.