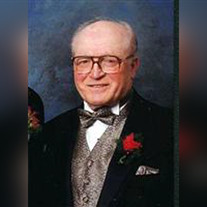 Darold P. Bohl, 85, of Grand Island died Monday, January 3, 2011 at the VA Medical Center in Grand Island. Funeral services will be at 2 pm Thursday at Livingston-Sondermann Funeral Home. The Reverend Lonnie Logan will officiate. Burial will be in the Grand Island City Cemetery.  Visitation will be from 4-8 pm Wednesday at the funeral home with the family receiving friends from 5-7 pm.   Memorials are suggested to the VA Medical Center in Grand Island or the Humane Society. Mr. Bohl was born on July 22, 1925 in Grand Island to Phillip and Margaret (Liebsack) Bohl.  He grew up in Grand Island and received his education at Grand Island Senior High.   He entered the United States Army Air Corps on February 25, 1944 and served during World War II. He was honorably discharged on May 9, 1946 with the rank of First Sergeant. He received the Good Conduct Medal, American Theater Ribbon and the Victory Ribbon.   Following his service he was employed by the Union Pacific Railroad in Grand Island for 32 years. He retired in 1980.   He was united in marriage to Virginia Wanitschke of Loup City on June 26, 1959 in Lincoln, NE. The couple made their home in Grand Island where they raised their two sons, Larry D. and Gary P. Bohl.  Darold was a member of the United Congregational Church, the Liederkranz, the Eagles Club, the VFW and the Grand Island Saddle Club. He was an avid card player and enjoyed going to the Fonner Park horseraces with his friends.   He is survived by his wife Virginia of Grand Island, two sons and daughters in law, Larry Bohl and his wife Karen of Kearney, and Gary Bohl and his wife Nicki of Litchfield, a granddaughter, Mackenzie Bohl and three grandsons, Logan, Drew and Trey Bohl.  He is also survived by a sister, Delores Ahlin of Glen Allen, VA, and a sister in law, Sylvia Bohl of Grand Island and several nieces and nephews.  Mr. Bohl was preceded in death by his parents, grandparents, two sisters, Dorothy Bohl and Irene McQuown, and two brothers, Melvin Bohl and Edward Bohl.

The family of Darold P. Bohl created this Life Tributes page to make it easy to share your memories.

Send flowers to the Bohl family.