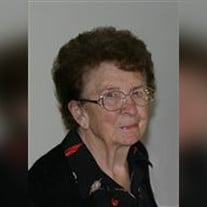 Deloris 'Dee' Breitenfeldt, 84, of Giltner, died Friday, September 18, 2009 at Bryan LGH East in Lincoln.    Funeral services will be on Wednesday at 10:30 A.M. at Livingston-Sondermann Funeral Home.    Burial will be at the Cedarview Cemetery in Doniphan.    Visitation will be on Tuesday from 5:00 until 8:00 P.M. at Livingston-Sondermann Funeral Home.    Mrs. Breitenfeldt was born on December 16, 1924 at Doniphan to Claborn and Anna (Schmidt) Shields.    Survivors of the immediate family include two sons and one daughter-in-law, Steve Breitenfeldt of Giltner, and Dan & Lori Breitenfeldt of Omaha; two daughters and one son-in-law, Pat & Steve Wendt of Fremont, and Bonnie Breitenfeldt of Waverly; three sisters, Elayne Daniels of Hastings, Burdetta Fricke of Hastings, and Anita (Fred) Bunde of Roseville, California.    Additional survivors include 8 grandchildren; 12 great-grandchildren; a sister-in-law, Bernice Shultz of Doniphan and two special friends, Liz Emerson of Giltner, and Chris Ferguson of Waverly.    Mrs. Breitenfeldt received her education in Doniphan and graduated from Doniphan High School.  She lived all of her adult life in the Doniphan area except for a brief stay in California.    She married Harold ‘Hans’ Breitenfeldt on August 11, 1945 in Smith Center, Kansas.  The couple lived and worked together on the farm for over 50 years.    Mrs. Brietenfeldt enjoyed gardening, sewing, cooking, and volunteering at the Doniphan American Legion Club. She was a member of the Doniphan American Legion Club Auxiliary.    She was preceded in death by her parents; her step-mother, Olga Shields; her husband Harold in 1996; one daughter, Kaylene; one granddaughter, Kayla Wendt; three brothers, Medrick Shields, Judson Shields, and Floyd Shields; and one sister, Marjorie Thomas.   Memorials are suggested to the family’s choice.

Deloris 'Dee' Breitenfeldt, 84, of Giltner, died Friday, September 18, 2009 at Bryan LGH East in Lincoln.    Funeral services will be on Wednesday at 10:30 A.M. at Livingston-Sondermann Funeral Home.    Burial will be at the Cedarview Cemetery... View Obituary & Service Information

The family of Deloris 'Dee' Irene Breitenfeldt created this Life Tributes page to make it easy to share your memories.