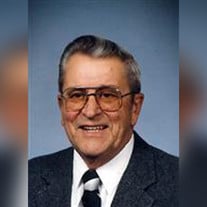 Donald H. Niemoth, 80, of Grand Island, died Wednesday, September 29, 2010 at his home.    Funeral services will be on Monday at 10:30 A.M. at Messiah Lutheran Church.  The Rev. Harvey Johnson will officiate.      Burial will be at the Grand Island City Cemetery. Military rights will be conducted by the United Veterans Honor Guard.    Visitation will be on Sunday from 4:00 until 8:00 P.M. at Livingston-Sondermann Funeral Home.    Mr. Niemoth was born on June 5, 1930 on the family farm north of Grand Island to Oscar and Elsie (Frenzen) Niemoth.    Survivors of the immediate family include one son, Cliff Niemoth of Grand Island; two daughters and sons-in-law, Deb (Dwayne) Mauldin of Lubbock, Texas, and Denise (Bob) Baker of Grand Island.    Additional survivors include three grandchildren, Jennifer Tuepker of Keller, Texas, Marcus (Michele) Tuepker of Shelburn, Vermont, and Breann Baker of Grand Island; one brother-in-law, Jack (Betty) Wagner of Round Rock, Texas; and two nephews, Jason and Justin Wagner of Texas.    Mr. Niemoth received his education at District #32 in Merrick County.  He graduated from Grand Island Senior High in 1947.  Following his education he was employed at Sothman Lumber Company.    He was inducted into the U.S. Navy on January 3, 1951, and was honorably discharged on October 18, 1954, as a First Class Petty Officer.    He married Sondra Wagner on June 10, 1955 in Grand Island.  From 1954 until 1959 he was again employed at Sothman Lumber.  Mr. Niemoth then worked for the U.S. Postal Service as a letter carrier in Grand Island from 1959 until his retirement in 1985.  After his retirement he continued to do carpentry work and build cabinets for another 10 years.  He loved to hunt, fish, and enjoyed playing cards at the Platte-Duetsche.    He was an active member of Messiah Lutheran Church where he served on the property committee; the V.F.W.; the Eagles Club (A Golden Eagle) and the Platte-Duetsche.    In addition to his parents, he was preceded in death by his wife, Sondra in 2007, and by numerous aunts, uncles, and cousins.    Memorials are suggested to Messiah Lutheran Church.

Donald H. Niemoth, 80, of Grand Island, died Wednesday, September 29, 2010 at his home.    Funeral services will be on Monday at 10:30 A.M. at Messiah Lutheran Church.  The Rev. Harvey Johnson will officiate.      Burial will be at the Grand... View Obituary & Service Information

The family of Donald H. Niemoth created this Life Tributes page to make it easy to share your memories.

Send flowers to the Niemoth family.