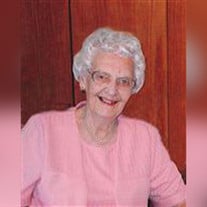 Doris (Babe) Marie Allen died Saturday, February 13, 2010 at St. Francis Medical Center in Grand Island. Memorial services will be at 10:30 am Tuesday at Livingston-Sondermann Funeral Home. The Reverend Jerry Quandt will officiate. There will be no visitation. Cremation services were provided by Westlawn Memorial Park. Burial of ashes will be at 11 am Wednesday at Oelrichs Hillside Cemetery in Oelrichs, SD. Memorials are suggested to the Oelrichs Hillside Cemetery Perpetual Care Fund. Doris was born on April 2, 1925 in Oelrichs, SD to August and Claudine (Roll) Seger. She grew up on a ranch in Oelrichs and attended Oelrichs Public School. She graduated from high school in 1943. She taught at a country school and attended beauty school in Lincoln, Nebraska. She then moved to New Mexico where she worked at Carlsbad Caverns. One of the greatest highlights of her life was her trip to Sweden with her father on the Queen Elizabeth to visit relatives prior to her marriage. She was united in marriage to Norman Laverne Allen on March 21, 1948 in Oelrichs, SD. The couple made their home in Chadron, NE; Rapid City, SD; Oelrichs, SD; Hastings, NE; and Hot Springs, SD. They moved back to Nebraska in 1999 to be closer to family. They celebrated 60 years of marriage together in 2008. Norman preceded her in death in November of 2008. Doris enjoyed reading, camping, fishing, playing cards and spending time with her children, grandchildren and great grandchildren. Survivors of the immediate family include three sons and two daughters-in-law, Larry and Kay Allen and Layne and Cathy Allen all of Grand Island, Gerald Allen of Moriarty, NM and a daughter, Karla Schneider of Round Lake Beach, IL. She is also survived by seven grandchildren and their spouses, Suzie and Ken Hartman of Omaha, Jarrod and Dayna Allen of St. Libory, Erik Schneider of Round Lake Beach, IL, and Rachelle and Matt Byars of Wichita, KS, Aaron Allen of Moriarty, NM, Nacie Allen of Vian, OK and Jeff Allen of Grand Island and five great grandsons, Peter, Sam and Nathan Hartman of Omaha and Mason and Zachary Allen of St. Libory. Doris was preceded in death by her parents, her husband, Norman L. Allen, her sister, Helen Dillon and her brother, Vernon Seger.

The family of Doris (Babe) M. Allen created this Life Tributes page to make it easy to share your memories.