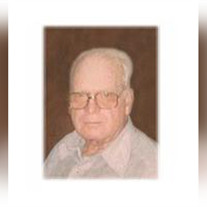 Duane D. Larkin, 83, of Omaha, formerly of Grand Island, died Sunday, March 25, 2012 at Via Christe in Omaha. Funeral services will be at 10:30 am Friday at Livingston-Sondermann Funeral Home. Pastor Mark Oberbeck will officiate. Burial will be at Westlawn Memorial Park. Visitation will be from 4-8 pm Thursday at the funeral home. Memorials are suggested to the family. Mr. Larkin was born on December 6, 1928 in North Platte, Nebraska to Don H. and Florence E. (Madison) Larkin. He grew up and received his education in Grand Island. He was united in marriage to Ruth E. Rogers on June 13, 1951 in Marysville, Kansas. The couple made their home in Grand Island where he worked part time for a gas station. At the age of 20 he went to work for Northwestern Public Service, now Northwestern Energy. He retired from Northwestern after 42 years. Mrs. Larkin preceded him in death on September 19, 1989. Duane was a past member of the Eagle’s Club, First Nazarene Church and the Evangelical Free Church.  He enjoyed hunting, fishing, working in his garden and traveling. Most of all he loved spending time with his family. Following Ruth’s death he loved drinking coffee every morning at Farmer’s Daughter and Tommy’s Restaurant and going for walks around Eagle Scout Lake. He is survived by a daughter and son-in-law, Mary and Gerry Grover of Omaha; two sons, Donald Larkin of Texas and David Larkin of Kansas; eight grandchildren; eight great grandchildren; a sister, Donna Olds of Wisconsin, and a brother and sister-in-law, Jerald and Allie Larkin of Hickman, NE. Duane was preceded in death by his parents, his wife, Ruth, a daughter, Linda Morris, and two brothers, Ronald Larkin and Victor Larkin.

Duane D. Larkin, 83, of Omaha, formerly of Grand Island, died Sunday, March 25, 2012 at Via Christe in Omaha. Funeral services will be at 10:30 am Friday at Livingston-Sondermann Funeral Home. Pastor Mark Oberbeck will officiate. Burial will... View Obituary & Service Information

The family of Duane D. Larkin created this Life Tributes page to make it easy to share your memories.

Send flowers to the Larkin family.