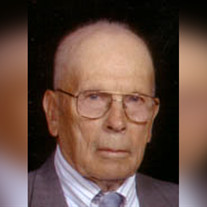 Earl H. Mohr, 87, of Cairo, died Tuesday, March 7, 2006 at Beverly Healthcare at Parkplace in Grand Island. Funeral services will be on Saturday at 10:00 A.M. at the United Methodist Church in Cairo. The Rev. Dale Lambert will officiate. Burial will be at Westlawn Memorial Park Cemetery. Visitation will be on Friday from 4:00 until 8:00 P.M. at the United Methodist Church in Cairo. Livingston-Sondermann Funeral Home is in charge of arrangements. Mr. Mohr was born on March 2, 1919 in rural Hall County to Henry & Martha (Grotz) Mohr. Survivors of the immediate family include his wife Donna of Cairo; one daughter, Nancy Sternberg of North Platte; and one son and daughter-in-law, Lee & Robin Mohr of Cairo. Additional survivors include 4 grandchildren, Danny and Amanda Sternberg, and Morgan and Alex Mohr. Mr. Mohr received his education in rural Hall County. At the age of 19, Mr. Mohr worked for Vern Donner at the Gables Ranch. He then moved to a farm near Ericson. He entered the U.S. Army Air Force on October 6, 1942. He served in England. He received the Distinguished Unit Badge, the European-African-Middle Eastern Service Medal with 6 Bronze Stars, 3 Oversees Service Bars, and 1 service stripe. He was honorably discharged on October 20, 1945. He married Donna Pierce on June 3, 1956 in Bartlett. The couple moved to Ord in 1958, before moving to Boelus in 1960. Mr. Mohr raised livestock, farmed, and milked cows. Because of failing health, the couple sold the farm and moved to Grand Island in 1980. He was employed at the Overland National Bank from 1980 until 1999. The couple then moved to Cairo and purchased an acreage with their son and daughter-in-law. Mr. Mohr was a member of the Cairo Methodist Church, and the Boelus American Legion. He was preceded in death by his parents, and three sisters, Helen Lykke, Erma Reinecke, and Agnes Browne. Memorials are suggested to the Cairo United Methodist Church.

Earl H. Mohr, 87, of Cairo, died Tuesday, March 7, 2006 at Beverly Healthcare at Parkplace in Grand Island. Funeral services will be on Saturday at 10:00 A.M. at the United Methodist Church in Cairo. The Rev. Dale Lambert will officiate. Burial... View Obituary & Service Information

The family of Earl H. Mohr created this Life Tributes page to make it easy to share your memories.

Send flowers to the Mohr family.