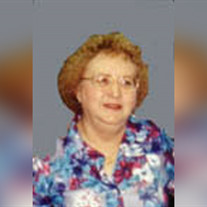 Edna M. Bowers, 88, of Grand Island, died Saturday, February 17, 2007 at the St. Francis Medical Center.    Funeral services will be on Thursday at 1:30 P.M. at the Messiah Lutheran Church.    The Rev. David Zellmer will officiate.    Burial will be at the Westlawn Memorial Park Cemetery.    Visitation will be on Wednesday from 4:00 until 8:00 P.M. at Livingston-Sondermann Funeral Home.    Mrs. Bowers was born on October 26, 1918, to Emil & Maria (Liedtke) Faustman, on the family homestead near Charleston, Nebraska in York, County.    Survivors of the immediate family include a daughter, Judy Einspahr of Grand Island; son and daughter-in-law, Jim & June Bowers of Grand Island, and son, Lawrence Bowers of Kearney.      Additional survivors include two grandchildren, Rick Bowers and Rhonda Randall; and two great-grandchildren, Levi and Kyle Randall all of Grand Island.    At an early age, the family moved to Aurora, where Edna attended the Aurora Public Schools.    She married Samuel F. Bowers on December 27, 1948 in Hastings.  The newlyweds moved into the new home that Sam built, where they lived the rest of their lives.  Her husband preceded her in death on April 1, 2000.    The greatest love in life was being a full time mother and wife.    Edna was a member of Messiah Lutheran Church.  Some of her hobbies were painting pictures, raising tropical fish, of which she won several awards, gardening, and she also enjoyed her two dogs.    In addition to her husband, Edna was preceded in death by her parents, and two brothers, Paul and Walter Faustman.    Memorials are suggested to Messiah Lutheran Church.

The family of Edna M. Bowers created this Life Tributes page to make it easy to share your memories.

Send flowers to the Bowers family.