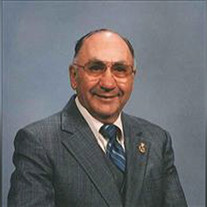 Edward John Kline, 94, of Grand Island died Sunday, March 15, 2009 at Riverside Lodge. Funeral services will be at 10:00 am Thursday at Resurrection Catholic Church. The Reverend James O’Kane will officiate. Burial will be in St. Joseph’s Cemetery in Giltner, Nebraska. Visitation will be from 4-8 pm Wednesday at the church with a Scripture Wake Service at 7 pm. Memorials are suggested to Sintka Gleska Junior College in Rosebud, South Dakota. Edward was born on November 13, 1914 in Trumbull to Daniel and Leona (Bassett) Kline. He grew up in Trumbull and graduated from Trumbull High School in 1933. Following high school he farmed in the Trumbull area. He entered the United States Army on February 24, 1941, serving during WWII. He received a Purple Heart for injuries he received during combat at Guadalcanal, Solomon Islands. He was honorably discharged on May 10, 1943. He was united in marriage to Grace Roberts on February 22, 1943 at Harvard. Afterwhich the couple lived in Trumbull where Ed farmed for 22 years. The couple moved to Pierre, SD where he was a building contractor until his retirement. In 1977 the couple moved to Roswell, New Mexico. Mrs. Kline preceded him in death on July 30, 1997. Ed moved to Grand Island in 1999. He was a member of Resurrection Catholic Church and the 4th Degree Knights of Columbus. He was also a member of the Veterans of Foreign Wars and Disabled American Veterans. He enjoyed traveling, especially with Grace following their retirement, and was an accomplished weaver and handyman. Ed is survived by a daughter Theresa Vojtech and her husband Donald of Rough and Ready, CA; seven grandchildren: Doug Engel of St. Joseph, MO, Dan Engel of Holdrege, NE, Michael Vojtech of Spokane, WA, Lucia Vojtech of Seattle, WA, Julia Vojtech of Cameron Park, CA, Mark Vojtech and Anthony Vojtech both of Rough and Ready, CA; three great grandchildren: Zachary, Devin and Chase Engel all of St. Joseph, MO; a brother Arthur Kline and his wife Leota of Grand Island, sister Rita Obermeier and her husband Clyde of Giltner, sister Rose Kehn and her husband Robert of Hastings and a sister Dorothy Meyerberg of Pacifica, CA. He was preceded in death by his parents, his wife Grace, a daughter Irene Engel and two sisters.

Edward John Kline, 94, of Grand Island died Sunday, March 15, 2009 at Riverside Lodge. Funeral services will be at 10:00 am Thursday at Resurrection Catholic Church. The Reverend James O&#8217;Kane will officiate. Burial will be in St. Joseph&#8217;s... View Obituary & Service Information

The family of Edward John Kline created this Life Tributes page to make it easy to share your memories.

Send flowers to the Kline family.