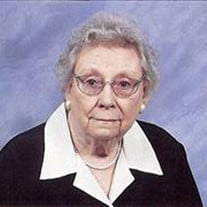 Eileen F. Noonan, 88, of Grand Island died Saturday, June 28, 2008, at Tiffany Square Care Center in Grand Island. Services will be at 10:30 AM Tuesday, July 1, at Sacred Heart Catholic Church in Greeley, NE.  Concelebrating the Mass will be Rev. Jim Murphy, Rev. Walter Phelan and Rev. John Cook.  Burial will be in the Sacred Heart Cemetery at Greeley. Visitation will be Tuesday at the church from 9:30AM until service time. Arrangements were made through Livingston-Sondermann Funeral Home. Eileen was born March 12, 1920, at Spalding, NE to Frank and Hazel (Peterson) Noonan. Survivors of the immediate family include one sister, Genevieve Birkby of Greeley; and one brother, Tom Noonan of Grand Island. Additional survivors include 17 nieces and nephews; and numerous grand-nieces and grand-nephews. Eileen attended Leo Valley grade school and graduated from Spalding Academy High School in Spalding, NE.  Following her graduation, she taught in the Leo Valley schools, Howard County schools, and then at the Fairview school six miles east of Greeley. She attended Kearney State College and received her bachelor’s degree in teaching.  She spent the next few years teaching at various jobs including Morton and Sumner, Washington; Lincoln High School in Tacoma, WA; Iowa State Teachers College; Emporia State College in Kansas; University of Iowa at Cedar Falls; Rosary College, Graduate School of Library Science in Chicago, IL; one summer at the University of Washington; and one summer at the University of Minnesota. While teaching at the University of Washington, she worked toward and received her Masters Degree in Library Science. Eileen stated that the best things in her life were teaching; reading; music; travel (to such places as Canada, U.S., Mexico, Hawaii, Japan, Hong Kong, Taiwan, Columbia, Peru, Ecuador, Ireland, Britain, France, Germany and Italy); the company of young people, and her family. She was a member of Blessed Sacrament Catholic Church in Grand Island and a member of the Catholic Daughters.  She enjoyed listening to music on her Bose Wave radio and watching Nebraska Public Television.  Needlework was one of her passions, and she gave away many handmade afghans. Eileen was preceded in death by her parents; two sisters, Kathleen and Rosemary Noonan; two nieces, Judy Noonan and Mary Bernadette Birkby; and one nephew, Patrick Birkby. She wishes to thank two challenging, rewarding and joyful years at Morton School in Washington, where the students taught her good lessons on how to live!  Eileen’s motto to live by was:  “there is no such thing as a bad day”. In lieu of flowers, memorials are suggested to Nebraska Public Television or the donor’s choice.

The family of Eileen F. Noonan created this Life Tributes page to make it easy to share your memories.

Send flowers to the Noonan family.