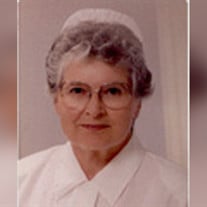 Eileen M. Portenier Richardson, 80, of Doniphan, died Wednesday, March 5, 2008 at the Skilled Care Unit of the St. Francis Medical Center.    Mrs. Richardson will be cremated, and there will be no visitation.     Memorial services will be on Thursday evening at 7:00 P.M. at St. Stephen’s Episcopal Church.  The Rev. Charles Peek will officiate.     Livingston-Sondermann Funeral Home is in charge of arrangements.     Mrs. Richardson was born on March 20, 1927 to Irma (Reeve) and Earl Portenier at their farm home near Inavale, Nebraska.      Survivors of the immediate family include her husband John of Doniphan; one daughter and son-in-law, Linda & Richard Carey of Longmont, Colorado; and her sister, Dorothy Williams, of Lincoln.       Additional survivors include two grandsons, Michael Jensen and his wife Donna of Virginia Beach, Virginia, and Christian Jensen and his wife Jame of Arvada, Colorado; three great-grandchildren, Nathaniel and Mikayla Jensen of Virginia Beach, Virginia, and Sarah Eileen Jensen of Arvada, Colorado; her sister-in-law and brother-in-law, Patricia and Earl Dean Richardson of Guide Rock, Nebraska, a dear friend, Diane Stevenson of Doniphan; as well as several nieces and nephews.     Eileen attended the Eckley Consolidated School in Webster County, graduating in 1944.  She joined the U.S. Cadet Nurse Corps and graduated from Mary Lanning Memorial Hospital in June of 1947.       In August of 1947, she married John A. Richardson, a union of 60 years.  They renewed their wedding vows at St. Stephen’s Episcopal Church in Grand Island in August of 2007 in celebration of their 60th anniversary.     Eileen spent many years in nursing.  Some of her most rewarding experiences included starting the Home Health Agency in Broken Bow, Nebraska and teaching geriatric nursing to care staff members at Central Community College in Grand Island.      The retirement years were special for John and Eileen as they traveled and visited many places of interest.      She was a long time member of St. Stephen’s Episcopal Church.       Mrs. Richardson was preceded in death by her parents. In lieu of flowers, memorials may be made to St. Stephens’s Episcopal Church, the Doniphan Senior Center, or to the donor’s choice.

Eileen M. Portenier Richardson, 80, of Doniphan, died Wednesday, March 5, 2008 at the Skilled Care Unit of the St. Francis Medical Center.    Mrs. Richardson will be cremated, and there will be no visitation.     Memorial services will be on... View Obituary & Service Information

The family of Eileen M. Richardson created this Life Tributes page to make it easy to share your memories.

Send flowers to the Richardson family.