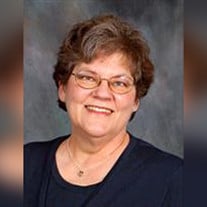 Enid Ruth Borgmann Cederlind, 65, of Phillips, passed away Friday, May 3. 2013, at the Henderson Care Center in Henderson, NE after a seven and a half year battle with cancer. According to her wishes, Enid was cremated. Burial will be at a later... View Obituary & Service Information

The family of Enid R. Cederlind created this Life Tributes page to make it easy to share your memories.

Send flowers to the Cederlind family.