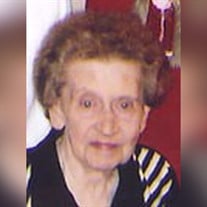 Ethel M. Medjo, 90, of Grand Island died Friday, June 29, 2007, at Country House Assisted Living Center in Grand Island. Services will be Monday at 10:30 AM at Livingston-Sondermann Funeral Home. The Rev. William Pavuk will officiate. Burial will be in Westlawn Memorial Park Cemetery. Visitation will be Sunday from 6 to 8 PM at the funeral home. Ethel was born January 15, 1917, at Sturgeon Lake, MN to Charles and Olga (Walgren) Olson. Survivors of the immediate family include one son and daughter-in-law, Terry and Cheryl Medjo of Grand Island, and one daughter and son-in-law, Debby and Morry Abshier of Norfolk, NE. Additional survivors include five grandchildren and their spouses, Mike and Katie Medjo of Castle Rock, CO, Cindy and Jason Kosmicki of Lincoln, Kristi Medjo of Lincoln, Brienne and Ryan Splittgerber of Alabaster, Alabama, and Joel Abshier currently stationed in Iraq with the U.S. Marine Corps; four great-grandchildren, Brandon Medjo, Jaman and Madison Medjo (twins) and Carter Splittgerber. Ethel grew up and attended school in Sturgeon Lake and graduated from Willow River High School in Minnesota in 1934. She attended beauty school in Minneapolis. She then worked for her father in the grocery store and then worked five years as a beautician. During World War II, she worked for Boeing in Spokane, Wash. in the manufacturing of planes for the war effort. Ethel married Robert A Medjo in 1945 at Ft. Sill, Oklahoma. They moved to Grand Island, NE in 1957. She worked at the Cornhusker Army Ammunition Plant for five years and at St. Francis Hospital for two years. She was a member of St. Pauls Lutheran Church, the Liederkranz, and Order of Eastern Star. Ethel was preceded in death by her husband in 1971, four brothers and three sisters. Memorials are suggested to the Alzheimer's Association.

The family of Ethel M. Medjo created this Life Tributes page to make it easy to share your memories.

Send flowers to the Medjo family.