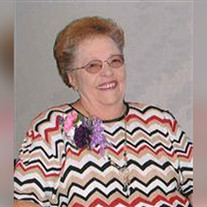 Ethel B. (Ross) Rezabek, 80, of Grand Island, died Thursday, January 28, 2010 at the St. Francis Medical Center.    Funeral services will be on Tuesday at 11:00 A.M. at Trinity United Methodist Church.  Chaplain Steve Shanno, and Rev. Melanie Adams will officiate.    Visitation will be on Monday from 4:00 until 8:00 P.M. at Livingston-Sondermann Funeral Home.    Following the service, Mrs. Rezabek’s body will be cremated and burial will be at a later date at Westlawn Memorial Park Cemetery.    Mrs. Rezabek was born on February 16, 1929 near Paxton, Nebraska to Jean E. and Eunice (Woodcock) Mason.    Survivors of the immediate family include her husband, Carl of Grand Island; three sons and daughters-in-law, Ken & Trish Ross of Grand Island, Allan & Margi Ross of Sabetha, Kansas, and Randy & Connie Ross of Grand Island; two daughters and sons-in-law, Peggy & John Walters of Broken Bow, and Deb & Randy Jarzynka of Cairo; two brothers and sisters-in-law, Don & Margaret Mason of Kearney, and Lyle & Mildred Mason of Castlerock, Colorado; and a brother-in-law, Roy Rezabek of Lincoln.    Additional survivors include 11 grandchildren; and 12 great-grandchildren; and several nieces and nephews.    Mrs. Rezabek received her education at the Miller School District south of North Platte, and graduated from North Platte High School in 1946.    She married Jesse W. Ross on April 23, 1948.  The couple moved to Grand Island in 1959, and Ethel was employed by the Selective Service.    Ethel then worked for the Grand Island Eagles Club as the Membership Secretary and served in this capacity for 32 years until her retirement in 1997.    She married Carl Rezabek on January 26, 1980 in St. Paul.    Mrs. Rezabek enjoyed crocheting, camping, bowling, and playing the piano and the accordion.    She was a member of Trinity United Methodist Church, the Eagles Auxiliary in Grand Island #378, the Grand Island B.P.O. DOES #147, and the Eagles Auxiliary in Hastings #592.  Mrs. Rezabek served as the Eagles state secretary for 10 years, and was also honored as the Eagles State Mother of the Year, and the Eagles State Grandmother of the Year.    She was preceded in death by her parents, and one brother, Bob Mason.   Memorials are suggested to the Fraternal Order of Eagles Diabetes Research Center in Iowa City, Iowa.

The family of Ethel B. (Ross) Rezabek created this Life Tributes page to make it easy to share your memories.