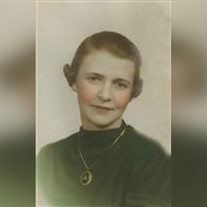 Evelyn L. Herzog, 96, of Grand Island died Friday, April 8, 2011 at Tiffany Square Center in Grand Island. Mass of Resurrection will be at 10 am Tuesday at St. Leo’s Catholic Church. The Reverend Charles L. Torpey will officiate. Burial will be in the Grand Island City Cemetery. Visitation will be from 4-8 pm Monday at the church with a Funeral Vigil at 7 pm. Memorials are suggested to St. Leo’s Catholic Church. Evelyn was born on January 12, 1915 in Cairo, Nebraska to John and Carrie (Sassen) Russel. She received her education in Abbott, Ne at District 54 School. She graduated from St. Mary’s in Grand Island in 1932. She was united in marriage to Robert D. Herzog on November 2, 1936. The couple made their home in Grand Island where she served as the Deputy County Assessor for seven years.  Mr. Herzog preceded her in death on March 7, 1992. Evelyn will be remembered as a loving wife, mother and grandmother. She enjoyed being a homemaker and loved playing bridge and volunteering at the election polls. She was a member of St. Leo’s Catholic Church, the Catholic Daughters of America, the Ladies of St. Leo’s, the American Legion Auxiliary No. 53, the Saddle Club, the Widows’ Club and the Does. Survivors of the immediate family include a son, Robert (Shirley) Herzog, Jr., of Chandler, AZ,  a granddaughter, Alina Craig of Hastings, two grandchildren, Cambria and Cierian Craig of Hastings, a nephew, Dr. John (Joan) Ferguson of Omaha, a sister-in-law, Shirley Anderson of Grand Island and several nieces and nephews. Evelyn was preceded in death by her parents, her husband, three brothers, Leo, Donald and Raymond, and two sisters, Mary Bryson and Louise Ferguson.

The family of Evelyn L. Herzog created this Life Tributes page to make it easy to share your memories.

Send flowers to the Herzog family.