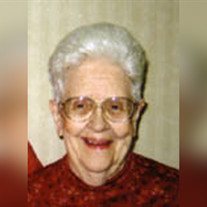 Florence C. Dietrich, 88, of Grand Island, died Friday, September 28, 2007 at the Madonna Rehabilitation Center in Lincoln.    Memorial services will be on Thursday at 11:00 A.M. at St. Paul’s Lutheran Church.  The Rev. Randy Fett and Chaplain Bill Noer will officiate.    Burial will be at the Grand Island City Cemetery.    There will be no visitation.    Mrs. Dietrich’s body was cremated.    Livingston-Sondermann Funeral Home is in charge of arrangements.    Mrs. Dietrich was born on September 15, 1919 in Grand Island to Carl and Frieda (Vick) Knickrehm.    Survivors of the immediate family include two sons and daughters-in-law, William C. & Esther Dietrich, and Robert A. & Sandy Dietrich all of Omaha; and one daughter and son-in-law, Ruth & Mike Fletcher of Grand Island; and one brother, Robert Knickrehm of Denver, Colorado.      Additional survivors include five grandchildren; three great-grandchildren; two step-grandchildren; and five step great-grandchildren; and one brother-in-law, H.L. Hanson of Grand Island.    Mrs. Dietrich received her education in Grand Island, and graduated from Grand Island Senior High in 1937.  She then graduated from the Grand Island Business College in 1938.    Following her education she worked in the family grocery store, Carl Knickrehm grocery, and was also employed by Nash Finch grocery wholesales.    Florence married William H. ‘Paav’ Dietrich on March 17, 1944 in Grand Island.    Florence was a loving and dedicated wife, mother, and homemaker.    She was a lifetime member of St. Paul’s Lutheran Church; the V.F.W Auxiliary; the American Legion Auxiliary, the Pearl Harbor Survivors Auxiliary; the Shrine Auxiliary, the Eastern Star; the United Commercial Travelers, the Friendly Neighbors extension club, various card and sewing clubs, and a life member of the P.T.A.    In addition to her parents, she was preceded in death by her husband in March of 2007; two sisters, Louise Lamb, and Margaret Hanson; and one brother, Carl Knickrehm Jr.    Memorials are suggested to the ‘Paav’ and Florence Dietrich Scholarship Fund at St. Paul’s Lutheran Church.

The family of Florence C. Dietrich created this Life Tributes page to make it easy to share your memories.

Send flowers to the Dietrich family.