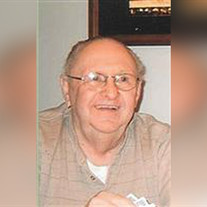 Francis “John” Vickers, Jr., 77 of St. Paul died Sunday, December 9, 2012 at the Veteran’s Hospital in Grand Island. Francis was born November 18, 1935 in Hornell, New York to Francis J. Sr. and Sarah (Bly) Vickers. He grew up in Andover, New York and upon graduation from high school entered the US Air Force July 1955 at Lincoln AFB. He was honorably discharged July 1964. Francis was a crew chief on the KC-97 refueling airplane. He did temporary duties in England; Harmon, Newfoundland; Thule, Greenland, and the Azores. He was also stationed in Guam. He also attended Mt. Vernon Bible College in Ohio. He was united in marriage to Ethel M. Anderson at Trinity Methodist Church in Grand Island on January 5, 1958. He worked as a mechanic all of his adult life. He worked on everything from planes to VW cars and 18 wheeler truck refrigerator units. He was also director of maintenance for Monfort Transportation in Greeley, CO. Family was very important to him as well as his love for the Lord. Francis was an avid Husker fan and loved football and his New York Yankees. He also enjoyed the outdoors. He was a member of the Foursquare Gospel Church and served as elder, councilmen, and youth pastor. Survivors of the immediate family include wife, Ethel of St. Paul; sons, John F. and Steven R. Vickers both of Grand Island; daughter, Robin (Vickers) and Craig Harmon of Dannebrog; grandchildren, Steven T. Vickers,  Joshua R. Vickers, Adam Harmon, Heather Harmon, Shelby Harmon; great grandson, Aiden Vickers. Additional survivors include sisters, Jackie and Avery Mead of Spencerport, NY, Shirley and Don Thorp of Andover, NY; brothers, Bruce and Mary Vickers of Rochester, NY, Robert and Angie Vickers of Arlington, TX, and David and Pat Vickers of Andover, NY. Francis was preceded in death by his grandparents, George and Lavinnia Vickers and his parents Francis and Sarah Vickers. Memorials are suggested to the family for later designation. Memorial service will be 10:30 am on Friday, December 14, 2012, at Livingston-Sondermann Funeral Chapel. The Reverend Roger Feola will officiate. According to his wishes, Francis was cremated and there will be no visitation or burial.

The family of Francis (John) J. Vickers created this Life Tributes page to make it easy to share your memories.