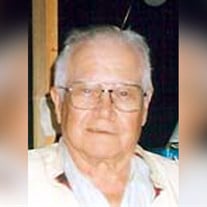 Frank F. Kiolbasa, 79, of Grand Island died Friday February 9, 2007, at Bryan LGH Medical Center East in Lincoln.      Services will be at 10:00 A.M. Wednesday at Blessed Sacrament Catholic Church.  The Rev. Francis T. Curran will officiate.  Burial will be in the Grand Island City Cemetery with military rites by the United Veterans Honor Guard.      Visitation will be Tuesday from 4 to 7:30 P.M. at Livingston-Sondermann Funeral Home with a vigil service at 7:30 P.M.  Mr. Kiolbasa was born May 11, 1927, at Genoa to Frank A. and Barbara (Uzendowski) Kiolbasa.      Survivors of the immediate family include his wife, Florence “Polly” Kiolbasa of Grand Island; two daughters and one son-in-law Barbara Bowling of Denver, CO and Susan and Larry Janssen of Minden; one son, Jim Kiolbasa of Kansas City, MO; two brothers, Edward Kiolbasa of Stillwater, MN and Gene Kiolbasa of Iowa City, IA; two sisters, Jeanette Kemper of North Glen, CO and Marg Stuckey of Omaha.      Additional survivors include six grandchildren and their spouses, Dean and Nicki Bowling, Angie Bowling, Shane and Velma Schutte, Erin and Jason Merryman, Austin and Megan Kiolbasa and nine great-grandchildren.     Frank graduated from Grand Island Senior High in 1945.  He then served in the U.S. Navy during WWII.  He returned to Nebraska following the service to start his own refrigeration and air conditioning business.  He continued in that line of work with Swift & Company and later with the Union Pacific Railroad until his retirement in 1989.      He married Florence “Polly” Krueger on November 22, 1948, at St. Mary’s Cathedral in Grand Island.  Frank enjoyed being in the outdoors, camping, fishing, hunting and also working on projects in his garage.      He was a member of Blessed Sacrament Church, the Grand Island Boat Club, the Saddle Club, the Eagles Club, American Legion and the Platt Duetsche.      He was preceded in death by his parents, two brothers, Ray and Chet; and two sisters, Sylvia and Rosie. In lieu of flowers, memorials are suggested to the American Heart Association or to Blessed Sacrament Church.

The family of Frank F. Kiolbasa created this Life Tributes page to make it easy to share your memories.

Send flowers to the Kiolbasa family.