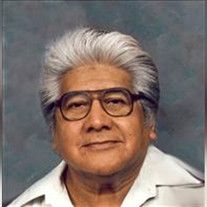 Frank R. Rivera, 89, of Grand Island died Wednesday, April 16, 2008, at Mary Lanning Hospital in Hastings. Services will be at 10 AM Monday at St. Mary’s Cathedral.  The Rev. Vince Parsons will officiate.  Burial will be in the Grand Island City Cemetery. Visitation will be Sunday from 4 to 7 PM with rosary at 7 PM at Livingston-Sondermann Funeral Home. Mr. Rivera was born April 15, 1919, at McAllister, OK to Joe and Pauline (Ramirez) Rivera. Survivors of the immediate family include his wife, Mary of Grand Island; four sons and a daughter-in-law, Frank Jr. and Phyllis Rivera, Richard Rivera Sr., Raymond Rivera and Jesse Rivera all of Grand Island; four daughters and two sons-in-law, Rachel Rivera, Arlene Rivera, Mary and Terry Mason, and Kathaline and Scott Laws all of Grand Island. Additional survivors include ten grandchildren and 21 great-grandchildren. Frank came to Nebraska at a young age.  He attended St. Cecilia’s Catholic School in Hastings. He enjoyed playing baseball in his younger years. Mr. Rivera served in the U.S. Army during World War II as an artillery gunner, in peace time he served with the Military Police. He married Mary Rebecca Aldana on February 23, 1943.  They lived in Kearney where Frank worked for the Union Pacific Railroad for over 25 years.  They moved to Grand Island and     Frank worked for Swift Packing from 1965 to 1979 when he retired. Frank was a musician and had his own family band, “Los Riveras”. He enjoyed spending time with his family, especially his grandchildren. Frank was a member of St. Mary’s Cathedral Parish, the Knights of Columbus, Eagles and VFW. He was preceded in death by one son, Joe Mario Rivera and one daughter, Anita Deloris Rivera. Memorials are suggested to the family.

Frank R. Rivera, 89, of Grand Island died Wednesday, April 16, 2008, at Mary Lanning Hospital in Hastings. Services will be at 10 AM Monday at St. Mary&#8217;s Cathedral.  The Rev. Vince Parsons will officiate.  Burial will be in the Grand... View Obituary & Service Information

The family of Frank R. Rivera created this Life Tributes page to make it easy to share your memories.

Send flowers to the Rivera family.