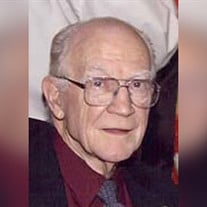 George F. Neuzil, 89, of Wood River, formerly of Grand Island died Saturday, July 1, 2006, at the Good Samaritan Center in Wood River. Services will be at 10:00 A.M. Wednesday at Blessed Sacrament Catholic Church in Grand Island. The Rev. Harold Kurtenbach and Rev. James Janovec will officiate. Burial will be on Thursday at 1:00 P.M. in the Oak Hill Cemetery at Plattsmouth, NE. Visitation will begin at 4 P.M. Tuesday at Livingston-Sondermann Funeral Home concluding with a rosary/wake service at 6:30 P.M. Mr. Neuzil was born November 1, 1916, at St. Paul, Minn. to Joseph W. and Gertrude (Rein) Neuzil. Survivors of the immediate family include his wife, Lois Neuzil of Wood River; one daughter and son-in-law, Nancy and William Schofield of Shelton, NE; one son and daughter-in-law, John P. ‘Jack’ Neuzil, PhD and wife Mary of Kent, Ohio; and one sister, Rose Ales of Lost Nation, Iowa. Additional survivors include seven grandchildren, John, Joe, Alexis, Mary Beth, Jonathan, Becky and Tom; and eight great-grandchildren. George grew up and attended school in Calmar, Iowa graduating from Calmar High School in 1934. He attended Luther College earning his Bachelor of Arts degree in 1938. He earned his Masters Degree from the University of Iowa in 1951. In 1965 he received a Specialist in Education Degree from the University of Nebraska at Lincoln. George married Lois Bestor on June 3, 1941 at Plattsmouth, NE. George’s work as a teacher and school administrator led them to live in various communities in Iowa and Nebraska. George retired as Superintendent of Schools from Elmwood, NE Public Schools in 1981. He and Lois then lived in Hamburg, Iowa until moving to Grand Island, NE in 1994. They then moved to the Good Samaritan Center in Wood River, NE in March of 2005. George was a member of Blessed Sacrament Catholic Church and was active in the parish choir. He was an active member of Kiwanis in both Hamburg and Grand Island. He served two terms as Lieutenant Governor of Kiwanis while living in Iowa and was also a Key Club sponsor. He also had attended several Kiwanis International Conventions. Mr. Neuzil was preceded in death by two infant sons, George Frederick Neuzil and Robert Joseph Neuzil; and one brother, Paul Charles Neuzil. In lieu of flowers, the family requests memorials to the St. Francis Medical Center Foundation of Grand Island, Nebraska or the Grape Community Hospital Foundation of Hamburg, Iowa.

The family of George F. Neuzil created this Life Tributes page to make it easy to share your memories.

Send flowers to the Neuzil family.