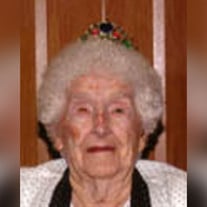 Gertrude K. Brester, 100, of Grand Island, died Friday, January 19, 2007 at Beverly Healthcare at Park Place.    Funeral services will be on Tuesday at 10:00 A.M. at Blessed Sacrament Catholic Church.  The Rev. Richard Piontkowski will officiate.    Burial will be at the Westlawn Memorial Park Cemetery.    Visitation will be on Monday from 4:00 until 8:00 P.M. with a 7:00 P.M. rosary at Livingston-Sondermann Funeral Home.    Mrs. Brester was born on October 6, 1906 in Knox County, Nebraska to Edward and Elizabeth (Bruns) Eickhoff.    Survivors of the immediate family include one son and daughter-in-law, Rodney & Caroline Brester of Gresham, Oregon; two daughters and one son-in-law, Darnelle Fraser of Denver, Colorado, and Gayalyn & Larry English of Alda.      Additional survivors include 14 grandchildren; 35 great-grandchildren; and 5 great-great grandchildren.    Mrs. Brester received her education in Knox County.  She graduated from the Guardian Angel Catholic School in Hartington, Nebraska in 1924. While a senior there, she took classes to obtain a teaching certificate, called Normal Training at that time.    She taught in various country school in Knox and Cedar Counties for five years, occasionally having students who were older than she was.    She married Herman Brester on June 4, 1929 in Crofton, Nebraska.    The couple farmed in Knox County until 1936.  They then moved to Alda, where they owned and operated the Brester Service Station until Mr. Brester’s death in 1970.    Mrs. Brester remained in her home in Alda until 1991, when she moved into her home in Grand Island. Throughout her life she was always active in St. Mary’s Catholic Church.  She was a member of various social groups.  She also worked in the kitchen at Barr Junior High.  She is one of the original attendees at the Senior Citizens Center, which she dearly loved.    Mrs. Brester is known world-wide for her homemade cinnamon rolls.  She also enjoyed traveling, having been to China, Germany, and well as the entire U.S.  She was also accomplished at crocheting.  But her greatest love was for her family.    In addition to her husband, she was preceded in death by one son, Elwyn Brester in 1953; her son-in-law, Dennis Fraser; five brothers; and five sisters.    Memorials are suggested to St. Mary’s Cathedral, or to the Grand Generation Center.

The family of Gertrude K Brester created this Life Tributes page to make it easy to share your memories.

Send flowers to the Brester family.