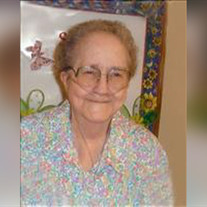 Gladys Lucile Larsen, 79, of Grand Island died Sunday, June 14, 2009 at St. Francis Skilled Care. Funeral services will be at 1:00 pm Friday at The United Congregational Church. The Reverend Lonnie Logan will officiate. Burial will be in Westlawn Memorial Park. Visitation will be from 4-8 pm Thursday with the family receiving friends from 5-6 at Livingston-Sondermann Funeral Home. In lieu of flowers memorials are suggested to the United Congregational Church, the American Diabetes Association or the donor’s choice.   Gladys was born on November 9, 1929 at Lisco, Nebraska to Henry and Maggie (Wiese) Schlieker. She grew up in Lisco and the family later moved to Grand Island where she attended Grand Island Senior High. She was united in marriage to Harvey O. Larsen on January 3, 1948 at Grand Island. The couple made their home in Grand Island where Gladys worked for O.P. Skaggs, Bill Trading Post and Ulrey Talbert. She retired from Ulrey Talbert in 1980. Her husband preceded her in death on October 23, 1998.   She was a member of the United Congregational Church in Grand Island and the National Association of Retired Federal Employees. Gladys was active in PTA and enjoyed taking her children to their sporting events. She also enjoyed doing crossword puzzles, playing bingo and reading.   She is survived by a son, Bill Larsen and his wife Joan of Lincoln, a daughter, Pat Mader and her husband Lloyd of Grand Island, a son, Gary Larsen and his wife Michele of Grand Island, a son, Paul Larsen and his wife Shelly of Emporia, KS, a daughter, Paula Cates and her husband Ron of Lakeland, FL, a daughter, Vicky Roepker and her husband Dave of Meridian, ID, 18 Grandchildren and 17 Great grandchildren.   She is also survived by a sister-in-law, Helen Schlieker of Fremont, NE, a sister-in-law, Martha Suntych and her husband Dale of Grand Island and several nieces, nephews and cousins. Gladys was preceded in death by her parents, her husband, two brothers, three sisters and a great granddaughter, J.J. Johnson.

Gladys Lucile Larsen, 79, of Grand Island died Sunday, June 14, 2009 at St. Francis Skilled Care. Funeral services will be at 1:00 pm Friday at The United Congregational Church. The Reverend Lonnie Logan will officiate. Burial will be in... View Obituary & Service Information

The family of Gladys L. Larsen created this Life Tributes page to make it easy to share your memories.

Send flowers to the Larsen family.