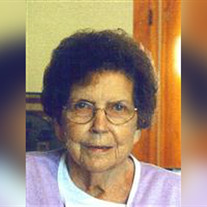 Gladys M. McDowell, 86, of Grand Island, died Saturday, August 21, 2010 at the Wedgewood Care Center in Grand Island.    Memorial services will be on Saturday at 10:30 A.M. at Livingston-Sondermann Funeral Home in Grand Island.  Paul Julian and Jerry Quandt will officiate. A celebration of life service and burial will be in Mooreland, Oklahoma at a later date.    Mrs. McDowell was born on October 26, 1923 in Quinlan, Oklahoma, the 10th of 12 children to John Andrew and Mary Elizabeth (Mullins) Gardner.    Survivors of the immediate family include her husband Warren of Grand Island; son Mark McDowell and wife Pat of Longmont, Colorado; daughter, Kristin Henry and husband Doug of Grand Island; daughter-in-law, Brenda Frame of Lake Havasu City, Arizona; brother and wife Robert and Charmaine Gardner of Mooreland, Oklahoma.    Additional survivors include 10 grandchildren; 10 great-grandchildren; sisters-in-law, Verlee Gardner of Newkirk, Oklahoma, Marge McDowell of Woodward, Oklahoma, Glenda Ingraham of Buffalo, Oklahoma, and brother-in-law and wife, Bid and Leona McDowell of Mooreland, Oklahoma, as well as a host of nieces and nephews.    Gladys lived on a ranch near Quinlan during her childhood, graduating from Quinlan High School in 1941.  She worked at the Mooreland Community Hospital, owned a seamstress shop in Mooreland, and then married Warren McDowell on December 25, 1947, after he finished his time in the Air Force during World War II.  They made their home in Mooreland, until Warren was called back into the Air Force during the Korean War, and they lived in Georgia, Texas, and California before relocating to the Mooreland area.  They then lived in Goodwell, Oklahoma while Warren attended Panhandle State College for his teaching degree.  Gladys and Warren lived in Plains and Zurich, Kansas, then moved to Colorado Springs, Colorado where they lived until Warren retired from the School District in 1980.  During their retirement years, they moved between Colorado, Arizona, and Mooreland, finally moving to Hastings, Nebraska to be near family.      Gladys enjoyed her career as homemaker and seamstress.  She sewed clothing many years as a career and for many friends and for those in need, and in later years made quilts for her family.  Gladys also loved crocheting, gardening, and arranging flowers.  She was an active member of the Church of Christ, and spent many hours as a volunteer at Woodward Regional Hospital.    In addition to her parents, she was preceded in death by one son, Kevin McDowell; four brothers, Charles, John, Lewis, and Harold; sisters, Dorothy McCartney, Vivian Bradley, Mary Scates, Hazel Cunningham, and two infant sisters. Memorials are suggested to the Mooreland Senior Center or to the Woodward Regional Center Volunteer organization.

The family of Gladys M. McDowell created this Life Tributes page to make it easy to share your memories.

Send flowers to the McDowell family.