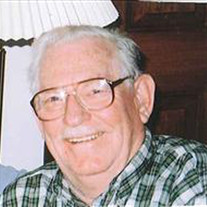 Harlan John Gulzow, Sr., 81, of Grand Island died Friday, April 1, 2011 at St. Francis Medical Center. Funeral services will be at 10:30 am Wednesday, April, 6, 2011 at Livingston-Sondermann Funeral Home. Burial will be in the Grand Island City Cemetery. Visitation will be from 4-8 pm Tuesday at the funeral home. Memorials are suggested to the Kingdom Hall of Jehovah’s Witnesses. Mr. Gulzow was born on November 7, 1929 in Grand Island to John N. and Violet M. (Lacy) Gulzow. He grew up and received his education in Grand Island. He worked for the Union Pacific Railroad and later began working as a painter and wall paper installer for 44 years. He was united in marriage to Delores Soniville in 1948. The couple had two children, Jack and Judy. He later married Carol Jean Coufal and they had eight children; Tobias, Jessica, Juanita, John, Joseph, Josephine, Harlan Jr., and Carolyn. Harlan enjoyed fishing, camping, traveling, and the field ministry. He also loved spending time with and caring for his pets, Peirre, Spike and Keallie. He was a member of the Kingdom Hall of Jehovah’s Witnesses. Survivors of the immediate family include a son, Jack (Pam) Gulzow of Colorado, a daughter, Judy (Rick) Calhoun of Colorado, a daughter, Judy Ann of Washington, a daughter, Julie Hageman of Ithaca, NE, a daughter, Jessica Main of Philips, NE, a daughter, Juanita Davis of Grand Island, a son, John Gulzow of Nebraska, a son, Joseph (Becky) Gulzow of Salina, KS, a daughter, Josephine (Stacey) Harris of Oregon, a son, Harlan John Gulzow, Jr. of Ithaca, NE, and a daughter, Carolyn Gadson of Salina, KS. He is also survived by 35 Grandchildren and 35 Great Grandchildren. Harlan was preceded in death by his parents, his first wife, Delores, a son Tobias, three grandsons, Curtis, Jack Gulzow, Jr., and Nathan, and two sons-in-law, Kailin Main and Nyle Hageman.

The family of Harlan J. Gulzow, Sr. created this Life Tributes page to make it easy to share your memories.

Send flowers to the Gulzow, family.