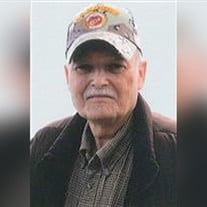 Harold M. Green, 64, of Grand Island, died Thursday, February 4, 2014, with his family at his side, at the VA Medical Center in Pittsburg, PA.  Funeral services will be at 1:00 pm Tuesday, February 11th at Third City Christian Church. Pastor... View Obituary & Service Information

The family of Harold M. Green created this Life Tributes page to make it easy to share your memories.

Send flowers to the Green family.