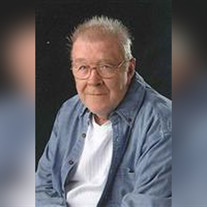 Harold C. Newsome, 73, of York, Nebraska died Monday, July 16, 2012 at the Grand Island Veterans’ Home in Grand Island.  Livingston-Sondermann Funeral Home is serving the family. Harold was born July 19, 1938 in Ellsworth, Kansas to Cecil and Gertrude Newsome. In 1962 he moved to York, Nebraska. He married Karen Epke in January of 1968 in Grand Island. The couple made their home in York. He is survived by his wife Karen; three sons, Jay, Dana and Scott (Arinda) Newsome; eight grandchildren, Brittney, Breanna, Keagan, Kaden, Angelyna, Katie, Anthony and Josh; two sisters, Barb Randolph of Salina, KS and Nancy Schukmann of Caspar, WY. He is also survived by two brothers-in-law, Rex (Lois) Epke of Gresham, NE and Larry (Sherry) Epke of Topeka, KS; several nieces and nephews and numerous young people who called him Dad or Pops. Harold was preceded in death by his parents, a brother Norman Newsome, a sister Delores Orth, a brother-in-law, Gene Randolph, his mother-in-law and father-in-law, Edwin and Paula Epke and a brother-in-law, Wayne Epke. It was Harold’s wish to be cremated and to have no service. We, his family, will follow his wishes. Interment or ashes will be at a later date in Great Bend, Kansas. Memorials may be sent to the family for later designation.

The family of Harold Cecil Newsome created this Life Tributes page to make it easy to share your memories.

Send flowers to the Newsome family.