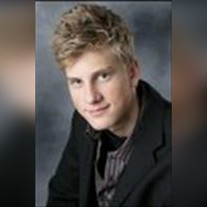 Henry Steven Muhlbach, 19, of Cedar Rapids, Iowa, died Wednesday, December 3, 2008 at the University of Iowa Hospitals and Clinics in Iowa City, from cancer.   Funeral services will be on Monday at 11:00 A.M. at Livingston-Sondermann Funeral Home.  The Rev. Jerry Quandt will officiate. Burial will be at the Westlawn Memorial Park Cemetery. A luncheon will follow the service at Trinity Lutheran Church. Survivors include his parents; grandparents, Ken & Agnes Muhlbach of Grand Island, Carol Grimminger of Cedar Rapids, Iowa, Gwyer & Joyce Grimminger of Grand Island; sisters Emily Muhlbach and Madison Muhlbach; brothers, Lewis Muhlbach and William Muhlbach, all of Cedar Rapids; aunts and uncles, Jennifer and Craig Boehlke of Sylmar, California, Marc and Lisa Grimminger of Ceresco, Nebraska, Kurt and Tonya Grimminger of Plano, Texas, John and Sheryl Haile of Grand Island, Mike and Janice Walford of Elkhorn, James and Kathy Muhlbach of Grand Island, Connie Bartling of Norman, Oklahoma, and Michelle Skala of Lincoln. Henry was born on August 7, 1989 in Ellsworth Air Force Base, South Dakota the son of Vern and Ann Grimminger Muhlbach. He attended Trinity Lutheran School in Grand Island.  He then attended Isaac Newton Christian Academy and graduated from Washington High School in Cedar Rapids, Iowa, and was attending Kirkwood Community College. Henry was employed by Tomaso’s Pizza. Henry showed great strength, hope and courage beyond his years.  His family and friends will remember him for his humor, wisdom and insight.  He was a talented writer, and loved music and poetry.  His integrity and faith in the midst of so many trials have served as an inspiration for all who knew him.  Henry loved his family and friends and was a devoted son, brother, and friend. In lieu of flowers, a memorial fund has been established in Henry’s memory.

Henry Steven Muhlbach, 19, of Cedar Rapids, Iowa, died Wednesday, December 3, 2008 at the University of Iowa Hospitals and Clinics in Iowa City, from cancer.   Funeral services will be on Monday at 11:00 A.M. at Livingston-Sondermann Funeral... View Obituary & Service Information

The family of Henry Steven Muhlbach created this Life Tributes page to make it easy to share your memories.

Send flowers to the Muhlbach family.