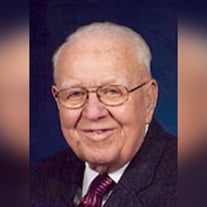 Hugo G. Wiese, 87, of Grand Island, died Wednesday, September 13, 2006, at St. Francis Medical Center in Grand Island.    Funeral services will be at 10:00 A.M. Saturday at Messiah Lutheran Church in Grand Island.  The Rev. David Zelmer will officiate.  Burial will be in Westlawn Memorial Park Cemetery.    Visitation will be Thursday at Livingston-Sondermann Funeral Home from 4 to 8 P.M. with family greeting friends from 4 to 6 P.M.    Mr. Wiese was born February 22, 1919, on a farm northwest of Grand Island to Frederick and Anna Dorothy (Reher) Wiese.    Survivors of the immediate family include his wife, Susan of Grand Island; three daughters and one son-in-law, Joe Anne Shapiro and Barbara Wiese of New York City, Alicia and Dan Haussler of Grand Island; one brother and three sisters-in-law, Glen and Betty Wiese and Emmy Wiese all of Grand Island and Anne Walsh of Phoenix, AZ.    Additional survivors include three grandchildren and their spouses, Michele and Rick Eberl of Grand Island, Brad and Tina Haussler and Greg and Kris Haussler of Lincoln, NE; five great-grandchildren, Hannah, Katie, Grant, Makayla and Jimi and one great-great-grandchild, Trynity.    Hugo graduated from District 18 School and the N.Y.A. School in Kearney.    He married Susan Lampitelli in Brooklyn, NY on July 22, 1945, at St. Michael’s Church.  They had celebrated their 61st Anniversary    Mr. Wiese worked in the Bremerton Navy Yard in Bremerton, OR from 1942-1944 and served in the U.S. Navy from 1944-1946.  He served in New York City, Norfolk, VA and St. Augustine, FL.    He returned with his family to Grand Island in 1947.  He worked for REA from 1948 to 1951 after farming with his father for one year.  From 1951 to 1958 he worked at the Cornhusker Army Ammunition Plant and served as president of the Chemical Workers Union for two years.  He then worked for Claussen Construction Co. for one year before working at the VA Hospital as a nurse’s aide from 1959 to until his retirement in Feb. 1979.    Hugo was a member of Messiah Lutheran Church, the American Legion since 1947, Stuhr Museum, American Association of Retired Persons, the Platt Deutsche, Hall County Historical Society, Grand Island Area Retired Teachers, National Association of Retired Federal Employees, International Visitors Association, and a past volunteer for the Red Cross and Stuhr Museum.  He had served on the Red Cross Board of Directors for eight years and had donated over 14 gallons of blood.    Mr. Wiese will be remembered as a friend to all.  He was always ready to extend a helping hand, especially to the handicapped.  He enjoyed visiting with people, strangers and friends.  He loved to garden and to share his produce with others.  He had an insatiable curiosity, loved reading, history and traveling.  He made it a point to visit all 50 states and many foreign countries.  He had visited Hawaii three times and Alaska twice.  Hugo loved people and would make friends at every stop along the way while traveling.      He loved nature, especially eagles.    He was preceded in death by his parents, and one brother, Arnold.       Memorials are suggested to Stuhr Museum, Messiah Lutheran Church or the donor’s choice.

The family of Hugo G. Wiese created this Life Tributes page to make it easy to share your memories.

Send flowers to the Wiese family.