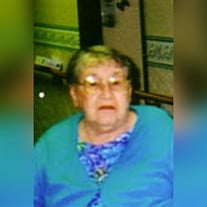 Irma Reeve Portenier, 100, of Grand Island, died Monday, October 1, 2007 at the Skilled Care Unit of the St. Francis Medical Center.    Funeral services will be on Friday at 10:30 at the United Methodist Church in Doniphan.  The Rev. Jocelyn Tupper will officiate.    Burial will be at 2:00 P.M. Friday at the Guide Rock City Cemetery.    Livingston-Sondermann Funeral Home is in charge of arrangements.      Irma Louella Reeve was born October 24, 1906,  to Louetta (Ogilvie) and Harry Reeve at their farm home in the Eckley community near Guide Rock, Nebraska.  She was educated in the local rural schools, graduating from the Eckley Consolidated High School in 1925.    July 28, 1926, she was united in marriage to Earl A. Portenier, a union of seventy years.  Two daughters were born to them—Eileen May and Dorothy Jean.  Irma and Earl farmed first in the Inavale area and then moved to her girlhood home, purchasing it from her parents.  Here they experienced the struggle of the “Dirty Thirties” during the drought years.  Later, as conditions improved, they expanded their farming operation.  During these years, Irma belonged to the Ladies Home Extension Club and incorporated much of what she learned into her home making.    Early in 1950, Irma and Earl purchased property in Florida, built a new home there, and moved in 1951 to Mayo, Florida where they farmed and ranched for a number of years.  In 1960, they planted their ranch to pine trees and retired to Port Richey, Florida.  They later moved to New Port Richey where they were active in Masonic organizations—Earl a 33 degree Scottish Rite Mason and Irma affiliated with the Ladies’ Oriental Shrine, first joining Tahuti Chapter in Tampa and later becoming a charter member of the Nefertiti Chapter in New Port Richey. An accomplished organist, Lady Irma was the chapter’s musician for many years.    Irma was baptized as a young woman into the Methodist faith at the Eckley Methodist Church.  This has been her religious affiliation throughout her life, most recently attending the Doniphan Methodist Church.    When Earl’s health began to fail they returned to Nebraska, establishing a home in Grand Island to be near their daughter and son-in-law, Eileen and John Richardson.    When Earl required nursing home care, Irma purchased a home near Doniphan in 1989 and drove almost daily to visit and care for him.  She remained in her home until 1999, when she fell and fractured a hip.  From that time she lived in various care facilities, most recently at St. Francis Skilled Care where she received loving care for a number of years.    Irma is survived by her daughters, Dorothy Williams of Lincoln, and Eileen Richardson and her husband John of Doniphan; granddaughter, Linda Carey and husband Richard,         grandsons, Edward and Gary Williams,; four great-grandsons and spouses; one great-granddaughter; one great great-grandson; one great great-granddaughter; and her dear friend Diane Stevenson.  She is also survived by sisters-in-law, Helen Portenier Bosley of Hastings, Lois Portenier of Pagosa Springs, Colorado; nieces and nephews and a host of friends.    In lieu of casketbearers, Irma would like to honor the following women in her life.  Helen Bosley, sister-in-law; Diane Stevenson, dearest friend; Carol Fitzgerald, dear friend; Sandra Majciewski, dear friend; Marg Langan, dear friend, Lael Hinds, old and dear friend; Elsie Sharpsteen, old and dear friend; Patricia Richardson, dear friend, and Linda E. Carey, granddaughter. Memorials are suggested to the Doniphan Senior Center, or to the donor’s choice.

Irma Reeve Portenier, 100, of Grand Island, died Monday, October 1, 2007 at the Skilled Care Unit of the St. Francis Medical Center.    Funeral services will be on Friday at 10:30 at the United Methodist Church in Doniphan.  The Rev. Jocelyn... View Obituary & Service Information

The family of Irma Portenier created this Life Tributes page to make it easy to share your memories.

Send flowers to the Portenier family.