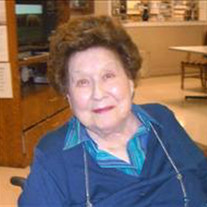 Isabelle B. Jakubowski 95, of Grand Island, died Saturday, May 2, 2009 at Beverly Healthcare at Park Place. Funeral services will be on Thursday at 10:00 A.M. at St. Mary’s Cathedral. The Rev. Richard Piontkowski will officiate. Burial will be at the Westlawn Memorial Park Cemetery. Visitation will be on Wednesday from 4:00 P.M. until 8:00 P.M. with a 7:00 P.M. rosary all at Livingston-Sondermann Funeral Home. Mrs. Jakubowski was born on February 12, 1914 at Ashton, Nebraska to John and Mary (Jasnoch) Peters. Survivors of the immediate family include one daughter and son-in-law, Joan & Richard Lonowski of Grand Island; four sons, Robert Jakubowski and friend Jenny Syfrett, Tom Jakubowski , Terry Jakubowski and friend Lyn Bloodgood, Chuck Jakubowski and friend Dorleen Kamper all of Grand Island; three sisters, Rita Budzinski of St. Paul, and Lily Del Stobbe and Joyce Stobbe of Grand Island. Additional survivors include 18 grandchildren; 5 step-grandchildren; 39 great-grandchildren; and 13 great-great grandchildren. Mrs. Jakubowski was raised and received her education in Ashton. She married Robert L. Jakubowski on February 12, 1934 in Ashton. The couple moved to Grand Island in 1955. Mrs. Jakubowski was employed at the Pastime Café, Color Craft, the Cornhusker Army Ammunition Plant, Jack & Jill Bakery, and then Aguilar Janitorial. She enjoyed raising flowers, playing cards, dancing, attending the races at Fonner Park, drinking red beer, and most of all spending time with her family. She was a member of St. Mary’s Cathedral, the St. Mary Ladies Altar Society, the Isaac Walton Auxiliary, and the Military Order of the Purple Heart Auxiliary. In addition to her parents, she was preceded in death by her husband Robert, in 1995; one son, Jerome; an infant daughter, Mary Ellen; one grandson, Steve; and two great-great grandchildren. Memorials are suggested to the family’s choice.

Isabelle B. Jakubowski 95, of Grand Island, died Saturday, May 2, 2009 at Beverly Healthcare at Park Place. Funeral services will be on Thursday at 10:00 A.M. at St. Mary&#8217;s Cathedral. The Rev. Richard Piontkowski will officiate.... View Obituary & Service Information

The family of Isabelle B Jakubowski created this Life Tributes page to make it easy to share your memories.

Isabelle B. Jakubowski 95, of Grand Island, died Saturday, May...

Send flowers to the Jakubowski family.