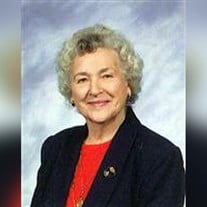 Jacqueline “Jackie” E. Hanover, 83, of Grand Island, died Friday, December 30, 2011, at Good Samaritan Society in Wood River. Memorial services will be at 10:00 a.m. on Saturday at St. Mary’s Cathedral. The Rev. Richard L. Piontkowski will officiate. Burial will be in the West Lawn Memorial Park Cemetery. According to Jackie’s wishes she was cremated. The family will greet friends from 5 to 7 p.m. Friday at Livingston-Sondermann Funeral Home in Grand Island, followed by a rosary and vigil service at 7 p.m. Mrs. Hanover was born on November 29, 1928, at home near Ord, to Fred and Irene (McHugh) Neumann. Jackie moved from Ord to Grand Island with her family, and attended rural school and St. Mary’s Cathedral School. She graduated from St. Mary’s High School in 1946. Jackie married Leighton K. ‘Buster’ Hanover on Dec. 26, 1946 at St. Mary’s Cathedral. They made their first home in Tacoma, Washington. Upon the urging of her parents, they returned to Grand Island in 1948. Jackie and Buster farmed the ‘home place’ where she had grown up, until they retired in 1985. Jackie was happiest when she was with her family. She was devoted to the love of her life, Buster, and the care of her children. She was a great cook and was known to make the best fried chicken and potato salad. She fed many a farm harvest worker to contented fullness. Her love of farming and the land led her to be a strong advocate for farmers and ranchers. She served for many years on Nebraska Farm Bureau Federation committees formulating and promoting farm-related legislation. Jackie loved to dance and was an avid reader. Her most favorite thing to do was to spend time with her grand children and great-grandchildren. She loved gardening and always took most of the produce to elderly friends and others who were unable to have a garden. She spent much time visiting shut-ins and those in Care Homes. For many years she was a caregiver to her mother, husband, and other family members. She loved everyone, and only saw the good in them. Her most used quotes as she raised her children were “Treat others as you want to be treated,” “If you haven’t got anything good to say about someone, don’t say anything at all,” and “Walk a mile in their shoes.” She was very humble and refused any recognition from charitable organizations for her years of volunteer work. She was always looking out for others, giving rides to strangers who “weren’t dressed for the cold weather,” who were “too old to be walking so far,” or were “carrying a gas can.” She always cleaned the table at restaurants so the “waitresses didn’t have to work so hard.” She pulled weeds in front of the Courthouse and other government buildings as that was “our responsibility.” She pulled weeds around local businesses “just to help them out.” She was very strong in her faith. She often said it is surprising how many prayers you can say for others while you are waiting for a red light to change or for a train to pass. She was always humble and selfless, in all things. She is survived by two daughters and sons-in-law, Sharon and Gerald Beyersdorf of Spokane, WA, and Janet and Ray Stander of Grand Island; six grandchildren, Michelle and her husband Tom Simmons, Brenda Beyersdorf, Jennifer and her husband Travis Griffith, Dale Stander, Jeff Stander and his wife Janet, and Brian Stander and his wife Kay. She also has 10 great-grandchildren, Michael and Sarah Simmons, Preston and Sydney Griffith, Jay and Jack Stander, and Aussia, Chloe, Isaiah, and Elias Stander. She was preceded in death by her husband, Leighton K. Hanover, a son, Dale E. Hanover, her mother and father, and two sisters, Imogene Lechner and Jeanette Doan. ` Memorials are suggested to St. Mary’s Cathedral, Catholic Relief Services, or The Salvation Army.

The family of Jacqueline "Jackie" E. Hanover created this Life Tributes page to make it easy to share your memories.