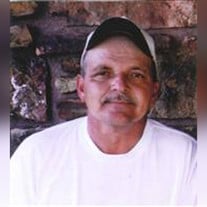 James “Danny” D. Washington, 53, of Grand Island passed peacefully away Monday, November 7, 2011 at home with his family by his side.  A celebration of his life will be held at 1 pm Thursday at Livingston-Sondermann Funeral Home with his brother-in-law, Tim Meguire officiating.  His cremated remains will be laid to rest at the Grand Island City Cemetery. The family will receive friends from 4-6 pm Wednesday at Livingston-Sondermann Funeral Home.  Jim was born on March 13, 1958 in Tahlequah, OK.  His early years were spent close to his beloved grandparents Thurman and Ethel “Granny” Brown in Braggs, OK.  He graduated high school in Tulsa, OK in 1976.  He worked as a security guard in Tulsa, OK and was married to Phyllis Noel in 1977.  He moved to Grand Island in 1984 and worked as security guard at Conestoga Mall, then began working at Delicious Foods, and later Millard Refrigerated Services.  He married Gerri Zlomke on September 9, 1985.  He was employed the last 15 years at Ace Hardware in Shipping and Receiving.  He began his very courageous and hard fought battle with Head and Neck cancer in April of 2010.  Jim loved life, always joking around and pulling pranks. He especially loved spending time with his family and friends at home enjoying the back yard that he worked hard to create.  He always had it filled with something fun for the kids and grandkids.  He also enjoyed camping, fishing, country drives, playing softball, family vacations, spending time with and spoiling his dog Charlie and cat Daisy.  Even though he lost the ability to speak during the last years of his life his ability to communicate and love remained strong.  Every day was a blessing.   Those left to cherish his memory include his wife, Gerri; a son and daughter-in-law James and Kendra Washington, Jr. of Grand Island; a son Richard Washington of Virginia Beach, VA; a son Brandon Washington of Tulsa, OK; a daughter Jessica Washington of Lexington Park, MD; a son Samuel Washington of Grand Island; and a daughter Sara Washington of Grand Island; granddaughters Rylee, Madison, Raegan and Kennedie Washington of Grand Island; mother and step father Sylvia and Richard Wilcox of Grand Island; brother Tony Washington of Grand Island; sister Debbie (Judd) Morgan of Merriwa, New South Wales, Australia; sister Angela Washington of Grand Island; sister Robin (Doug) Pollack of Seward, NE; a brother Brian (Lisa) Wilcox of Fremont, NE; Parents-in-law Eldon and Connie McCandless of Broken Bow, NE; along with numerous nieces, nephews, other relatives and friends.  He was preceded in death by his father Billy Gene Washington; grandparents, Thurman and Ethel Brown; Joe Axe and Agnes Washington; and grandparents-in-law Jed and Glennie Mooney along with others whose memories he held close.

James &#8220;Danny&#8221; D. Washington, 53, of Grand Island passed peacefully away Monday, November 7, 2011 at home with his family by his side.  A celebration of his life will be held at 1 pm Thursday at Livingston-Sondermann Funeral Home... View Obituary & Service Information

The family of James "Danny" D. Washington created this Life Tributes page to make it easy to share your memories.