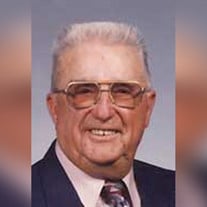 James M. Houts, 90, of Grand Island died Friday, Sept. 28, 2007, at St. Francis Medical Center in Grand Island. Memorial services will be at 2 p.m. Monday at Livingston-Sondermann Funeral Home. The Rev. Jay Vetter will officiate. Burial will be in Westlawn Memorial Park Cemetery with military rites provided by the United Veterans Honor Guard. There will be no visitation. Mr. Houts body was cremated. Mr. Houts was born June 17, 1917, at Rockport Mo., to Earl and Ruth (Louder) Houts. He was preceded in death by a son, Dale James. Survivors of the immediate family include his wife, Annabel (McMindes) Houts; a sister, Hallie Green of Grand Rapids, Mich.; two daughters and a son-in-law, Diane Schneider of Mesa Ariz., and Janet and Bruce (Cat) Blackman of Breckenridge, Colo.; and a son-in-law, Dennis Schneider of Des Moines, Iowa. Other survivors are five grandchildren, Joe Schneider and his wife, Kelley, Bari Wallace and her husband, Jim, of Des Moines Iowa, DJ Clark of Omaha and Tammi Blackman and Chad Blackman of Breckenridge Colo.; four great-grandchildren, Scott and Erin Wallace and Zachary and Aiden Schneider; a brother-in-law and sister-in-law, Lyle and Jean McMindes; nephews, a niece and many cousins. Jim was raised on a farm outside of Atkinson. His family arrived in Atkinson from Hamburg, Iowa, when he was four years old. They traveled to Nebraska in an immigrant train with all their belongings, including a vehicle and livestock. Jim only remembers seeing the lights of Omaha. He was in the Army during WWII. Jim and Annabel were married 64 years ago in San Francisco, where he was stationed. They returned to Grand Island in 1945, and lived in several towns before returning to Grand Island in 1960. They owned a truck stop and cafe in Holdrege in the early 50s. He was in the automotive parts business for many years. They managed the Normandy Apartments for 15 years. After retirement, they spent their winters in Mesa, Ariz., and in the summer Jim worked on the maintenance team at Jack Rabbit Run. Jim loved his family, playing golf, and he had a 1951 Studebaker Champ convertible that he liked working on and driving in parades. He belonged to the Methodist church, Elks Club, Legion Club and the Platt-Duetsche. He was also preceded in death by his parents, and a sister, Charlene. Memorials are suggested to Trinity United Methodist Church or the Grand Island Elks Lodge.

The family of James M. Houts created this Life Tributes page to make it easy to share your memories.

Send flowers to the Houts family.