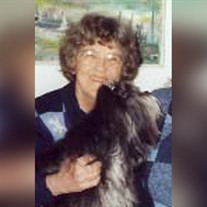 Janiece A. “Kitty” Lueth, 80, of Grand Island died Saturday December 16, 2006, at Beverly Healthcare at Lakeview in Grand Island.    Services will be at 10:30 A.M. Thursday at the First Presbyterian Church in Grand Island.  The Rev. Cheryl Lamb will officiate.  Cremation will take place following the services.  Burial of the cremains will be at a later date.    Visitation will be from 4 to 8 PM Wednesday at Livingston-Sondermann Funeral Home.    Miss Lueth was born January 24, 1926, at Grand Island to Ernest H. and Bertha H. (Zlomke) Lueth.    Survivors of the immediate family include her sister-in-law, Shirley Lueth of Aurora.    Additional survivors include eight nieces and their spouses, Karen and Dave Petersen of Lincoln, Mary Teachman of Lincoln, Sue Lueth of Aurora, Am and Patric Brechbil of Stanton, Claudia Perez of Grand Island, Lori and Paul Syverson of Elkhorn and Lisa Galusha of Enid, OK; three nephews and their spouses, John and Kris Lueth of Sioux Falls, SD, David and Beth Lueth of Percival, IA and Eric and Erin Lueth of Phoenix, AZ; 23 great-nieces and nephews and 7 great-great nieces and nephews; special friends, Barbara Glover, Shaun Shepardson and Gayle Christian; and her faithful, loving and loyal companion, Poppy.    “Kitty” worked for Wolbach’s, Brandeis and Younkers for over 50 years as a buyer and department manager for the children’s department.  She received many awards for superior service and sales.    Kitty served on the Board of Directors of the Central Nebraska Humane Society for many years.  She planted most of the trees and plants on the grounds of the pet cemetery.  She loved dogs and had many pets over the years.    Her flower and vegetable gardens were the envy of many.  She also enjoyed painting watercolors of which she gave many away.    Aunt “Neecie” loved to spend time with her many nieces and nephews.    Kitty was a member of the First Presbyterian Church.    She was preceded in death by three brothers, Lee, Jim, and Bob Lueth; and one sister-in-law, Doris Lueth.               Memorials are suggested to the Central Nebraska Humane Society or the family’s choice.

The family of Janiece A. "Kitty" Lueth created this Life Tributes page to make it easy to share your memories.